The 12-team Statis-pro playoffs began with Chisox and Yankees winning in the AL games being played in Montana. Then the NL playoffs were set when homers by Nola and Tatis led to 6 Padres runs in the 7th and 8th for a 6-3 win over the Reds to finish a half game ahead of them for the 6th and final spot.

Castillo outdueled Darvish to lead 2-0 going into the bottom of the 7th, though the Reds left 9 on base through 6 innings. The Padres Stammen came in the top of the 7th to strike out Naquin to leave bases loaded, the set the Reds down 1-2-3 in the 7th. Castillo then left in the bottom of the 7th after allowing the first two Padres to reach. Nola greeted reliever Lorenzen with a clutch 3-run homer, Tatis added a homer, and the Padres scored 2 in the 8th for the 6-2 win. Padres relievers allowed only 2 hits and 1 unearned run in 5 innings, with Adams closing for the save. 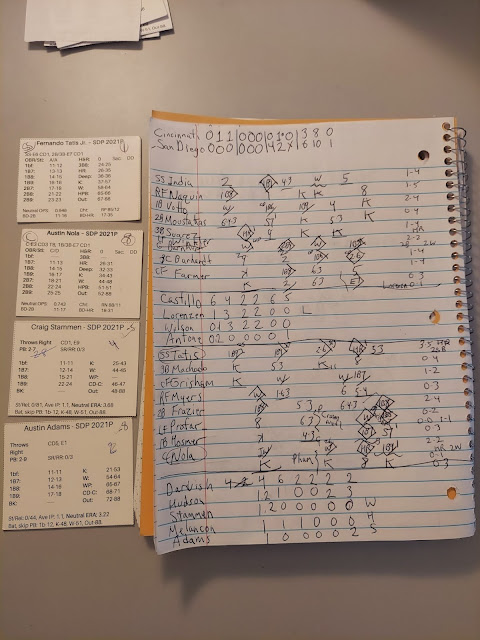 Posted by JohnPudner at 1:44 PM