In our decades of playing Statis-pro, this was the wildest game.

The Brewers survived a 6-5 win in 10 innings on a game-winning double by back-up catcher Pena, who was only in the game because Lopes pinch ran for Narvaez in the 9th and scored the tying run to force extra innings.

In the bottom of the 8th the Padres light hitting Kim was unable to drive Tatis (2 of 3, homer, 2 walks) home, and he was only in the game because Machado had been ejected.

The game ended with the Padres Cronenworth on third base after doubling to finish a 3 of 4 game - and he was only in the game for all-star second baseman Frazier due to the wildest inning if all in the bottom of the 2nd in which ...

One if the few PB2-9 starters - the Brewers Corbin - had a 1-0 lead going into the bottom of the second when the first 5 results of the inning were:

1. Corbin injured Frazier by hitting him with a pitch on a z-play. This can only happen on the 1 or 2 z-plays a game, ollowed by a 1 in 8 chance if drawing an 81-88 on the next random numbers followed by a 1 in 64 chance of the injury being on a hit by pitch.

2. Corbin the hits the next batter Profar with a pitch as well - no injury.

3. And then something I don't ever recall in playing this game since the 1980s - Corbin throws three straight wild pitches to let both runners score.

The game went back and forth from there before Harder pitches a Scoreless 8th and 9th for the win, while Melancon allowed a pinch hit single to Fisher. Fisher was thrown out stealing second but Cronenworth dropped the throw for an error, and the light hitting Pena doubled him home with 2 outs.

Vogelbach also hit two homers for the Brewers, who host all remaining games. 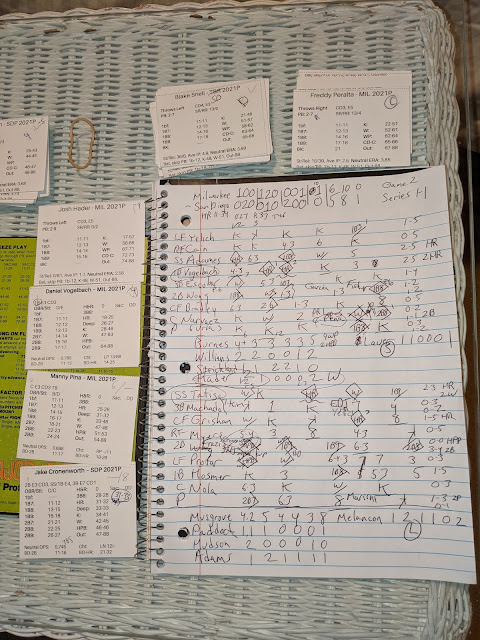