Statis-Pro Dodgers vs Padres wrap up

After rotating games between our two series, we decided to play out the Dodgers Padres however many games it took before going back to the Braves vs Mets with the Braves leading 3-0.

Betts and Bellinger combined to reach all 12 Times at the plate including 2 homes by Betts and one by Bellinger. The Dodgers pounded out 18 hits in a 15-8 win to go up 3 games to 0.

Ace Darvish gave the Padres a chance allowing only 2 runs in 6.2 innings, but the Dodgers No. 4 pitcher Price went 5 Scoreless Innings. The game went an incredible 17 innings before Bellinger hit his second homer if the game for a 3-2 win. In the 12th Smith made a clutch defensive play as catcher with bases loaded by jumping on what could have been a game winning single and stepping on the plate for the out. Gonzalez pitcher the 16th and 17th for the win.

The Dodgers sweep 4 games to 0 and await the Braves- Mets winner. 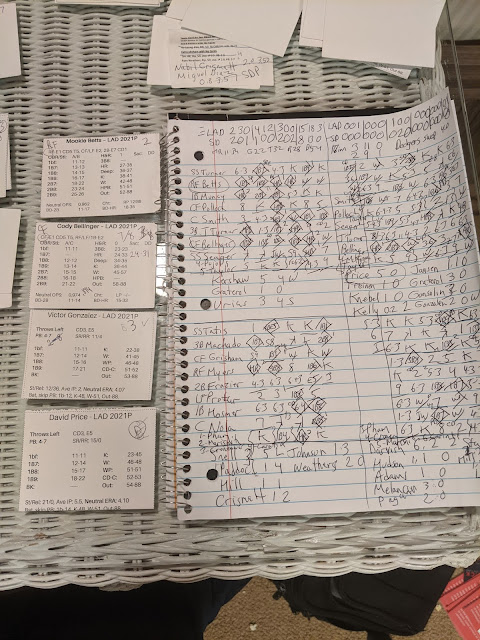 Posted by JohnPudner at 2:36 AM