On the same night the Dodgers stayed alive against the Braves in the ACLS in real baseball, both teams opened their first ALDS Statis-Pro game to try to make it to the same level. First the Braves game 1 vs the Mets, then below that the Padres at the Dodgers.

Fried allowed 3 hits in 8 innings, and as one if the best hitting pitchers had two hits at the plate to dominate a Braves 5-0 opener. Riley went 4 of 5 to lead a 10-hit attack in addition to singling in the first run after a Pederson triple.

While the Mets won the division to get the opening round bye, that was with deGrom winning every 4th game for the Mets, and with him gone the Braves look like the favorite. martin pitched a Scoreless 9th to give the Braves 10.1 Scoreless Innings in the playoffs going back to their sweep over the Giants.

One really tough break for the the Mets was when Lindor - despite the highest clutch defense rating if 5, drew and 81 to allow a 2-run single by Fried to get by him and chase Stroman. 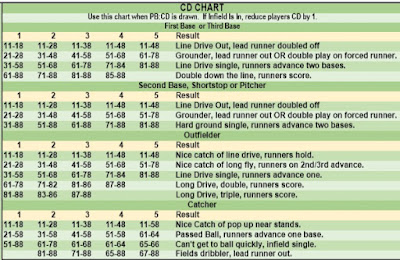 It should be noted though that most pitchers at the plate do not have a chance to force a clutch defense play because if theur hits go up to 18 or less then you go straight to the random number. Fried shower goes up to a 26 for a homer - making him the third best hitting pitchers in the game behind Ohtani and Lorenzen, so he does draw the 2-12 pb to see whose card it is one - or in this case a CD. Here is the score sheet. 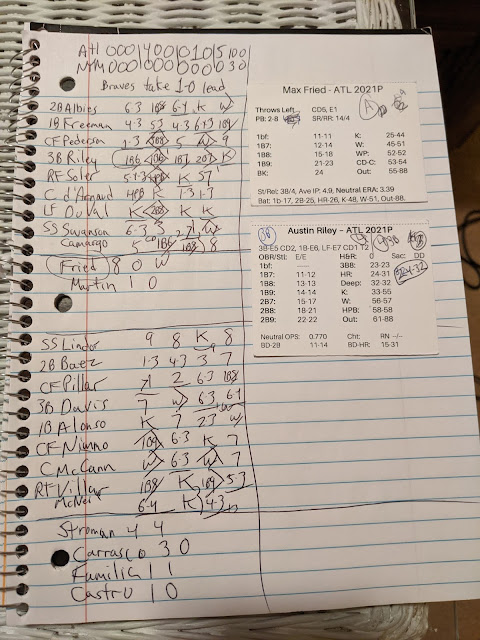 Scherzer threw 7 innings of one run baseball to give the Dodgers a 5-1 lead, but when he yielded a leadoff homer in the 8th it was nervous time due to the Dodgers one weakness in the game, the bullpen.

The Dodgers have no PB 2-9s in the penz and Jansen and Kelly are the only two PB 2-8s. The got the hold and save in the 5-3 win, but not before Kelly loaded the bases and took 6 batters to get out of the inning, meaning he is not available for game 2. (We play if you pitch to more than 5 batters you miss a game, and more than 10 you miss 2 games.

If all teams now leading their series were to win, it would mean the Statis-pro 4 league championship teams matched exactly the real 4 final teams. We do not believe that exactly has happened before but will double check.

Here is the score sheet. 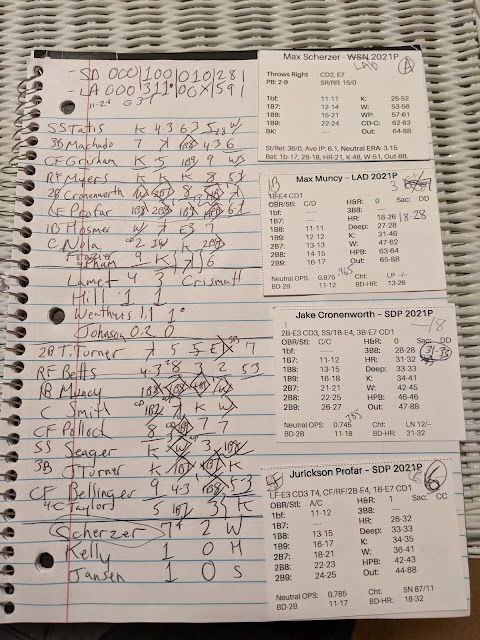