NLDS Set After 4 Lead Changes in Brewers vs Padres

A game that featured four lead changes could not have started worse for the Brewers, who led the league for a bye until the Dodgers passed them in the final series to force them to play the opening round. The Padres meanwhile were out if the playoffs until the final series, when the won to finish in a three way tie for the 6th and final playoffs spot, then won out to make it.

Already leading 2 games to 1, Tatis started the game with a triple. He scored and the Padres loaded the bases against the Brewers no. 4 starter Houser. However, Houser survived, and Vogelbach's 2-run homer off Padres ace Darvish made it 2-1 Brewers.

Padres went back up 3-2 on Myers's 2-run homer in the third.

The Brewers went up 4-3 on a 6th inning homer by Wong, then Cain rbi double in the 7th.

However, after Suter pitched 2 Scoreless Innings he gave up 8th inning homers to Homer and Tatis and the Padres advance.

The Padres now face the Dodgers, while the Braves travel to face the Mets, leaving the possibility of two "what if" teams who looked like contenders until real life injuries decimated them (Padres vs Mets), or the actual match up happening in real life (Braves-Dodgers) or one of each. 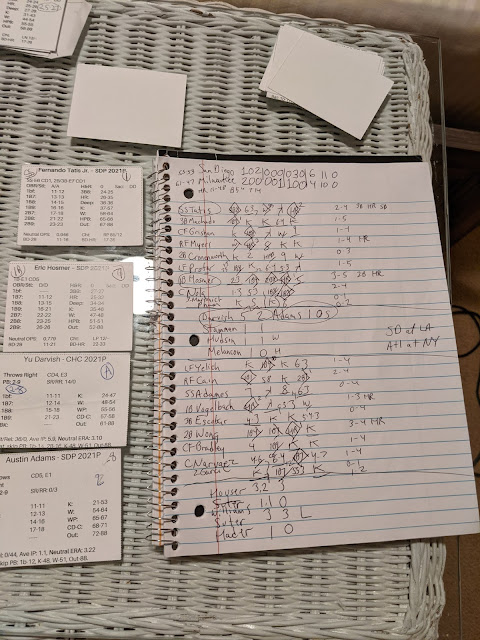