The Braves third game was practically identical to the two wins in San Francisco. All three featured a dominant start until each starter allowed a homer to make it close - then the Braves Relievers shut the door for holds and saves.

Adam DuVal hit a 2-run homer to give the Braves their lead, then mass a great catch to end the Giants rally in the 7th. That play was an FD7* - meaning a deep drive that could be dropped. The error card was 2-10, but DuVal is a rare E1 and thus one of the few players who would not have dropped it for a 2-base error.

Freeman also homered again, this time after a double by Albies, and Arcia hit a rare homer as a pinchitter to wrap up a 5-2 win. All 7 runs in the game were via the homer as Crawford homered for the Giants.

Too many memories of playing Statis-pro in the South when I hated the Braves because my friends all loved them and they kept beating my Astros - but they are not even in the same league any more, so good luck to all my friends who love the Braves in the real Game 2 against the Dodgers! 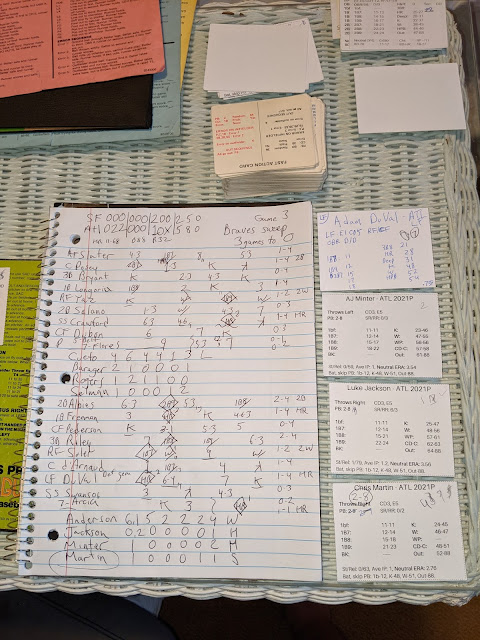 Posted by JohnPudner at 2:21 PM