I'm pasting all the scoresheets on our 4th Round recap, but my Hank Aaron Memorial series of Atlanta at Milwaukee made me go back and pull up the Advanced Statis-Pro Baseball cards for the 1957 Milwaukee Braves. The late, great Hammerin' Hank won the MVP and the World Series that year.

This series was desperation time for the most disappointing team (Braves 6-12) risking digging a hole with a trip to the most surprisingly hot team (Brewers 13-5).

In the first game Charlie Morton continued to look like the best No. 3 starter in the NL game with only one run allowed while striking out 10 in six innings. However, his last inning was scary after singles by Yelich and Vogelback and Morton hitting Urias with a pitch to load the bases with one out.

Narvaez then drove a potential game-clearing shot to right but Acuna, who had homered earlier, used his Clutch Defense 5 (highest rating) to not only make the catch but keep Yelich (on base running A) from tagging and scoring. Shaw then hit a DEEP drive that would have been a grandslam in some parks but was caught at the wall to end the inning. Shaw was later robbed in the 8th of a game-tying double on a drive down the line when Ozuna made a clutch catch.

In the second game it was the Brewers who barely held on. After the Brewers jumped in front 3-1, Freeman homered in the 4th then singled home Acuna to tie it 4-4 in the top of the 5th.

Shaw homered in the 6th to give.the Brewers back the lead, but in the top of the 9th threw away a grounder to third to put the speedy Incariarte at 2nd base with the potential game tying run. As it turned out, that was the only contact of the inning against the best pitching card in the NL, Hader, as he 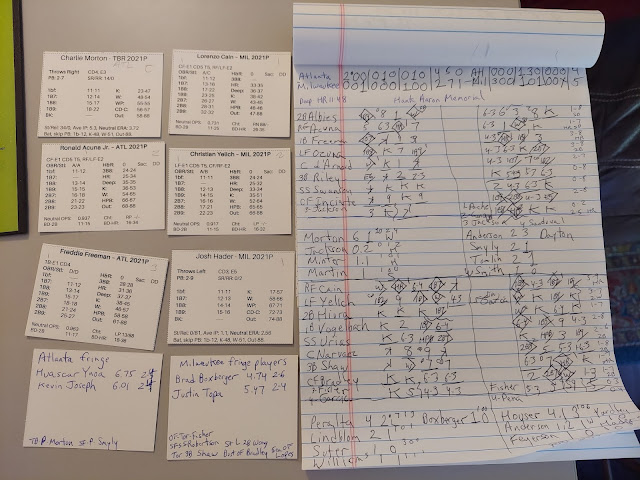 Posted by JohnPudner at 2:30 PM