Note: Before breaking down the Giants and Mariners relegation below - The Giants joined the Phillies and Pirates as teams relegated and not participating in the rest of the NL Statis-Pro season. The top 8 teams have clinched a spot in the 10-team season. Colorado and Miami are also relegated UNLESS either the Braves or Cubs get swept in 6-game series. If that happens, then fewer than 10 teams would have 16 wins, and the teams with 15 wins would fill the final spot(s) based on the tie-breakers 1) head-to-head record, 2) best record of opponents faced, 3) if both those are tied then a round robin between 3 tied teams or playoff between 4 tied teams.

As our Statis-Pro baseball leagues were trimmed from 15 teams to 10 teams for the duration of the season, the last two teams relegated were the Mariners (AL) and Giants (NL).

The Giants actually took both games from the DBacks, but neither the 5-3 or 5-2 wins qualified for 3-game sweep credit, giving them 4 games to 2 for the series to finish 14-22 and be relegated.

Mike Yastremski finished in style with a homer and double in a 4 of 8 series, and his T5 throwing arm held runners a couple of times.

These are the two relegated teams that are having great seasons in real baseball, leaving the question of if they are actually much better than their projections indicated, or if we should.expect them to come down to earth after hot starts. 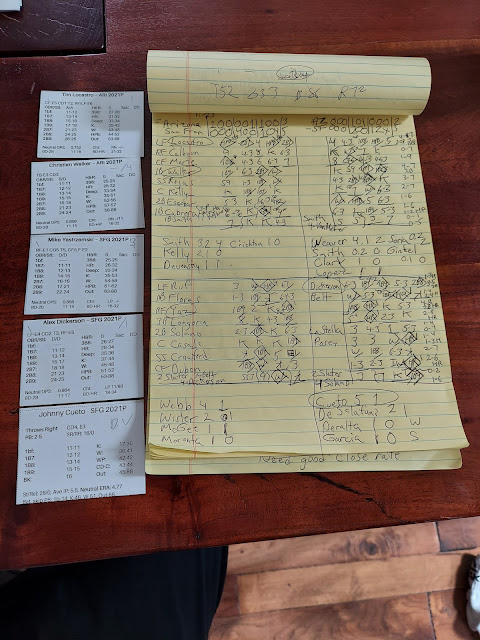 Posted by JohnPudner at 2:43 PM