Pretty hard to compete with the NFL draft, particularly when my last chance to play a 2-game set was Sunday in Colorado at 10,000 feet, before this Friday night game back in Alabama.

The two games tonight finished the 2 game series Sunday. As an fyi, 2 games take me a total of an hour while on my walking desk, for those of youbwho believe I have time to kill when playing these games.

First the Cubs truly backed into the final 10, being shut down for one run in two games by the Cards to get to 16-22, in 10th place of the 10 teams to make it, and just snuck in by a game over the Rockies and Marlins.

A Cubs homer by Pederson in the first game was we only run in either game in the losses of 2-1 and 6-0 (sweep in 2nd game made it 5 games to 1 on the record).

Game tip for others playing the Statis-Pro game is we only play that injuries last until the end of the we series. However Arenado was hurt in the first game so Carpenter came in at third base and then homered in game 2. 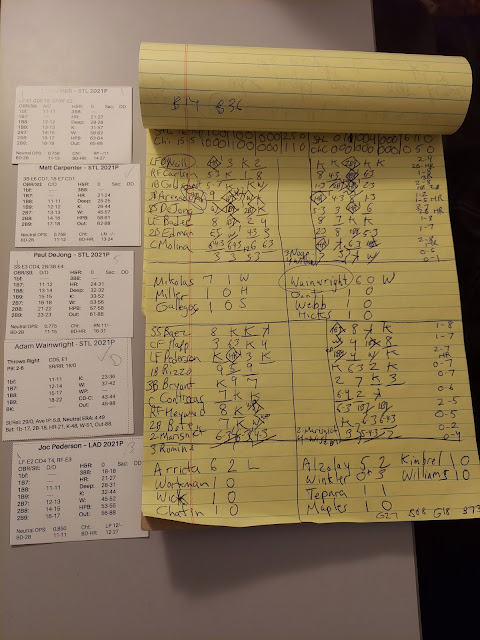 The Braves came back to win the second game against the Reds to split the series and stay at .500 at 18-18.

Bigger injury here as the Reds Senzel had a homer and two doubles and was then lost in the second game.

Also of note for Statis-Pro players is the decision regarding bringing in Martin in Game 2. You will see his card at the bottom left in the photo below. He had the best park neutral ERA available and his pb2-9 indicates he is in the top 5 percent of all pitchers. However his RR of 2 usually means he only pitches on inning because that is lowered means any time  a player reaches 1st (except on error) or scores, or an inning ends. Once two of those things happen he is a pb2-8- then every time another happens he is a 2-7- then 4-7, 2-6, etc.

Relievers can only pitch one inning or four up to 4 batters if they pitch in more than one inning, and after that if they still have rr they still lose one pb every batter faced.

In addition to that, in our league a team gets credit for winning three games in a row only if they lead by 5 runs at the end of the 8th AND they have not used the reliever available with the best era on his card has not been used by the 8th.

All of that being factored, the Braves led 5-1 going into the 8th, at which point if Dayton could pitch the top of the 8th and the Braves could add one run in the bottom of the 8th then they could claim the 3-game sweep with a 6-1 lead after 8 ad long as they held onto win the 8th.

However when Dayton gave up a 2-run homer and then walked runner to put the tying run on the plate, he dropped from a pb2-7 to a pb2-4, with Suarez coming to the plate as the tying run. Suddenly the focus turned to winning g the game to get 2 games to 1 credit with the sweep seeming out of range.

Martin came in to protect the 5-3 lead, thus forfeiting any chance for a sweep because he was used before the 9th inning.

Martin got the final out of the 8th, however the end of the inning meant his rr dropped from 2 to 1.

In the 9th he retired the first two batters, but he walked Naquin. At this point he was reduced to a pb2-8 - this would have happened because it was his 5th batter over more than one inning, or because the rr was reduced to 0, but you just give him the worst of the two methods you don't double down, so he became a pb2-8 to face Lorenzon, but would have dropped to a pb2-7 for the next batter etc due to being last 4 batters.

However, he struck out Lorenzen to wrap up the save, 5-3, and earn the split. 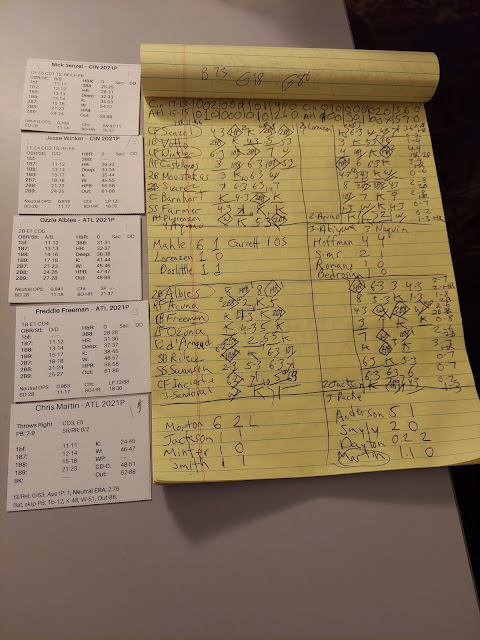