The NL Statis-Pro season is now underway as well, with my fellow Commissioner who like me has been playing Statis-Pro since the 1980s. He plays our his season straight up with a game counting as our Gamez unlike me who plays each game is a 3-game series.

He also relegates the bottom five teams at the outset of the season, while I wait in the NL and will drop the 5 bottom.team in my standings.

He also jokingly updated that the Houston Astros are under investigation again due to Jose Altuve having 4 Homers in 8 games.

In the NL, the third round (getting teams to 18 games) is wrapping up with a series between St. Louis and Philadelphia remaining.

After that 12 of the 15 teams will have 18 games played leaving the 3-team round robin to bridge the 3rd and 4th round between Arizona, Cincinnati and Colorado.

In the NL the two hot teams, the Brewers and Mets, split a series to stay in the top two spots.

Lindor was the start of the 2 games, going 5 of 10 with a homer, double and 2 steals while Alonso added a double and homer in the 6-2 win in the second game. Carrasco took the win with three scoreless innings from the few relievers left after the first game.

The first game Burns gave the Brewers.four scoreless innings to keep it close and let them get through deGrom and into extra innings, where the finally won 7-5 in 11 innings of attrition. 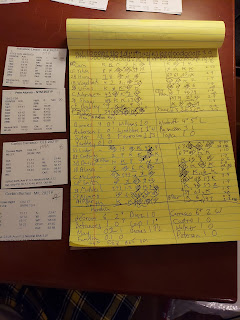 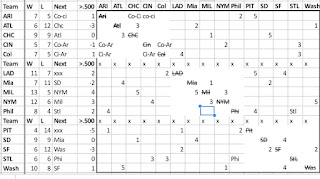 Posted by JohnPudner at 4:04 PM