When Craig Kimbrel entered my Statis-Pro game to Save a 7-5 win over the Mets last night I did a double take. He is a PB2-7, placing him outside the top 15% of all pitchers based on ERA adjusted for ballpark and FIPs, so in the game he the action is on his card 7 of 12 the time of the time (die rolls of 2-7) and batters card on rolls of 8-12.

But his projected ratio of hits is incredible, only allowed hits on 5% of roll (11-13 on the two 8-sided dice, so 14-88 is NOT a hit). My cards are based on a combo of the projected stats going into last year, and to a lesser degree, his less than seller actual innings last year. (Note and earlier version of this story incorrectly indicated he had a pb2-9.

Could the projections on fangraphs have been overly optimistic for his return? After he shut down the Mets in my game I checked his real stats this year. Oh, 6 appearances, 10 strikeouts, 1 hit and no runs allowed. Still early, but maybe he is back.

Now as far as both teams having 12 hits in the first game, that was the real fluke. I'm not sure that has happened all year in my game and not sure the real Cubs have 12 hits total in their first 11 games LOL. 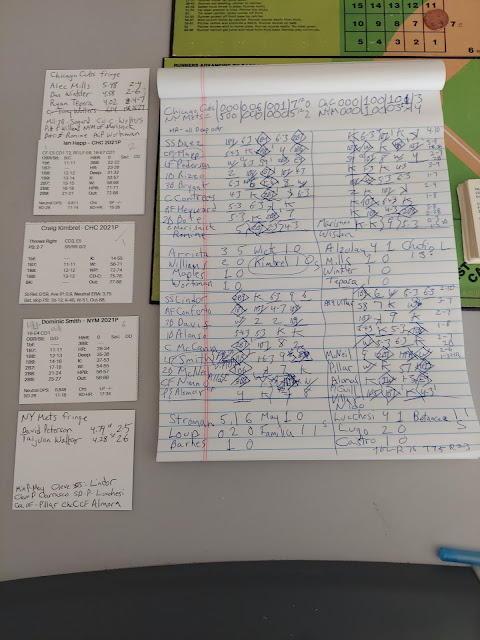 Only 2 series left in Round 4 with the bottom of the rotations. We will have the ace pitchers starting again for that round. The games are tracked on this google sheet.