The 5th round AL series are set up for our Statis-Pro baseball season. The following are the standings and grid of games. The No. 1 and No. 2 starting pitchers from 12 teams will face each other in two game series. The three teams in the "round robin" between the 5th and 6th series will be Colorado, Milwaukee and Washington, and in those series each team will throw either the No. 1 and No. 4 starters or the No. 2 and No. 3 starters.

So far 10 of the NL's 15 teams have played within 2 games of their actual team in real baseball games. The two teams with much better results are Arizona (15-9 record would be 5 games ahead of their real team) and Milwaukee (16-8 would be 3 1/2 ahead of their real team). Three teams are well below their actual team, starting with the LA Dodgers whose 14-10 mark is good but would leave them a full 3 games behind their real team - which won a 12 inning shootout with San Diego last night. Also San Francisco's 10-14 mark and Pittsburgh's 7-17 mark are both about what we expected but 3 1/2 and 4 behind their real teams so far.

Records above are before the games below.
5th round
Dodgers 3-2, then Cubs 7-6. Bauer (7 innings, 2 runs, 10 strikeouts) and Hendricks (8 innings, 1 run) had a great pitching duel. However, they were both gone in the 9th when Betts doubled and Turner homered to give the Dodgers the 3-2 win. In the second game 9th inning Homers by Betts and Bellinger to tie the game, but in the bottom of the 9th Contreras hit a clutch batting walk off double after hitting Homers in both games. 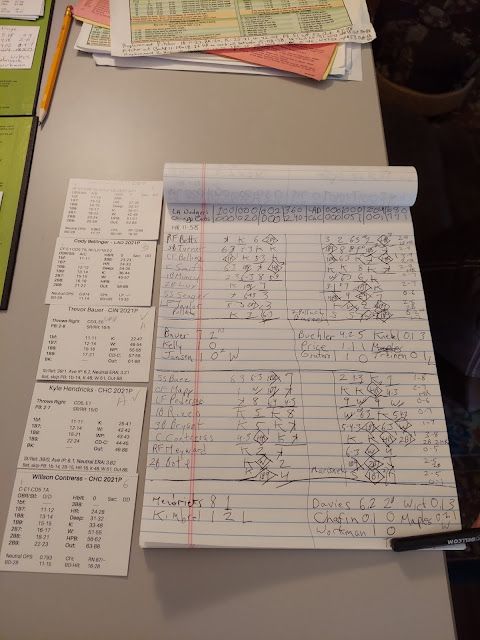 Arizona 4-3 (11 inn) then St. Louis 6-3. Two long relievers had to go two scoreless innings for wins. We only allow relievers to pitch a second inning if they averaged more than 2 innings a game. Escobar for the DBacks and both Carlson and Edman for the Cardinals all went three for eight with multiple extra base hits. 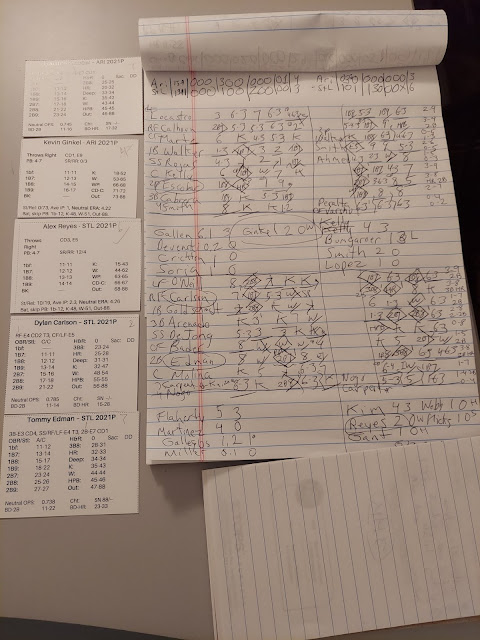 Posted by JohnPudner at 8:08 AM