As serving up my Statis-Pro game while watching the Rockies rally for a 5-4 win over the Phillies in a real game on my hotel TV...

The Colorado Rockies are the 15th team to play their 5th round series, meaning they go back to back to host Milwaukee in what is really Milwaukee's 6th round game, then play Washington, who played Milwaukee in the 5th round.

Colorado is hosting all 4 games, which means on the Statis-Pro Baseball Park home run chart all DEEP readings on a batters card (11-88) are home runs due to balls taking of at Coors Field's 5200' altitude. However, I am actually playing these games at even higher altitude, with snow up against my window in Georgetown, Colorado (8530', temp below freezing) and tomorrow in Breckenridge, Colorado (9600' feet).

Maybe I should turn doubles into Homer's tonight haha. Below is a photo of me outside the hotel where the game will be played. Game stories for all four will be added below that photo. A lot on the line with the Rockies risking being relegated if they get beat up and the Brewers trying to keep lace with the Mets (who have the best pitcher's Park with all DEEP flies being deep flyouts. 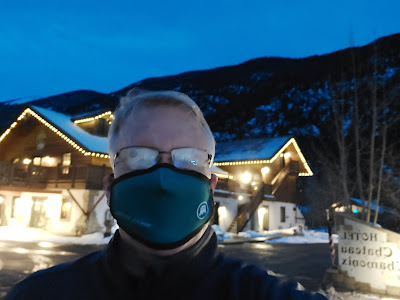 Marquez by far the biggest star with 8 shutout innings. No hitter on either team had more than 2 hits total in the two games. One note on the bottom left is the Rockies have one if the top fringe players in Ian Desmond. Note that his projected .750 OPS results in the fringe card with a 26-32 home run range. 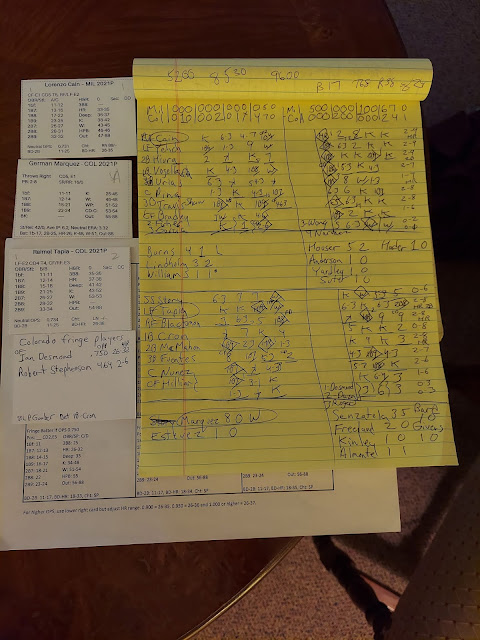 Scherzer, Turner and Soto led a sweep to put the Nats out of danger of being relegated. A team needed to go at least 16-20 to guaranty they are not relegated, and the Nats are 17-19.

Either 10 or 12 teams will advance after the first 36 teams.

The eight teams to win at least 16 of their first 36 games are guaranteed to advance and keep playing.

Two teams just need to go at least 1-5 this series to guaranty they continue - the Braves (against the Reds) and the Cubs (against the Cardinals). Assuming they do,, we know 10 teqms that will advance.

The Phillies are the one team right on the bubble, needing to go 3-3 against the Dodgerss. If they don't then it is likely only the 10 teams above advance.

However Miami can advance with a 5-1 mark against last place Pittsburgh, or the Giants could advance with a.6-0 sweep of Arizona. 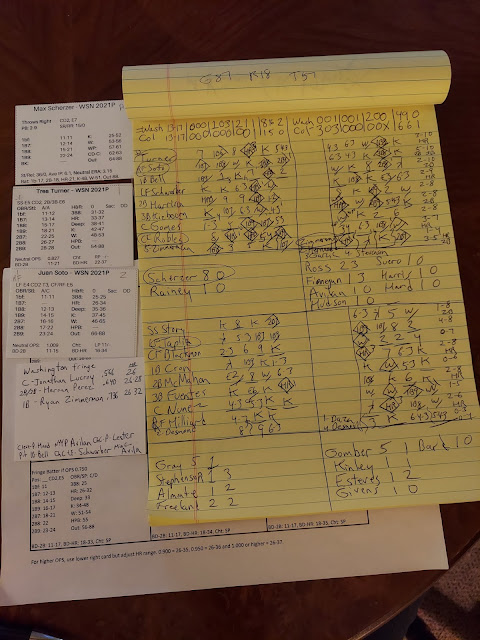 Posted by JohnPudner at 9:05 PM