By coincidence, Blake Snell pitched in my Statis-Pro game against the Pirates at the same time he was on TV in the final of a classic series with the Dodgers.

While the Dodgers dominate the early real season, the Padres just missed beating them the first two real games this weekend, and in our game the Padres lead them by one game (see NL Statis-Pro standings below).

The Pirates are just 9-21 in our game, and Snell pitches 6.1 shutout innings, allowing only a walk and 4 singles. With perhaps the best pen in the NL in our game, Snell stayed in for a batter in the 7th only because Polanco is much worse against lefties (12/--) indicates 11 or 12 on is card or opposing pitchers card changes from a hit to a strikeout).

I included Darvish, who won the first game, as a player of the game because his line should have been better than the 6.2 innings, 3 runs allowed. I made a managerial error by not taking Darvish out after he ran out or endurance on a 2-out pinch hit single by Evans. Darvish SR running out on that hit dropped from a PB2-9 to PB2-8 and sure enough a "9" put it on Hayes card who blasted a 2-run homer to pull the Pirates within 4-3 - though they held on.

Interestingly you would often leave a starter in to finish an inning with a pb2-8, but the Padres have the very unusual luxury of two relievers with a PB2-9, and if I'd put Austin Adams in he would have struck Hayes out. In fact Adam's came in and struck out the four he faced, then the other Padres PB2-9 reliever Drew Pomeranz retired the last 3 for the save.

I was however surprised Adams was a pb2-9, meaning one of the best 5 percent. When I pulled up the stats for him and Pomeranz (see below) I saw that both he and Pomeranz had FIPs below 3.00 in the last full season, 2019, which resulted in the great projections for our 2021 cards. An hour later I watched him come in and strike out all 3 Dodgers he faced on TV to go along with all 4 in out game today.

Melancion is the actual closer and Kela setup, and both have strong cards, but Adams and Pomeranz have the best Statis-Pro cards so I use them in the 8th and 9th if rested. 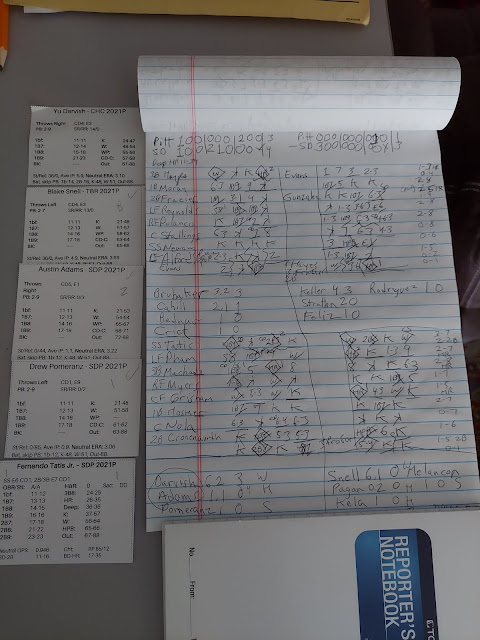 Posted by JohnPudner at 3:25 PM