The Mets-Marlins game Wednesday night is worth a Statis-Pro post for all the ramifications of changes in the game since the original. The res hot Brewers series and standings are at the bottom of the blog, bit first all about the Mets.

1. Jacob deGrom's PB: 2-9 card (see his card in photo at bottom) the best 5% of all pitchers for those who don't know the game) is accurate with a hits allowed range of 11-23 - or 11 numbers of 64 from the 11-88 range. Based on the old, inaccurate Statis-Pro formulas deGrom's card would have had an unrealistic 11-16 hits range or so. That means that every time the action was on deGrom's card there was still a 17% chance for the batter to get a hit - and of course normally higher when on the batters card, and yet, and yet deGrom went through 24 batters without allowing a hit, until an "18" game up to allow Rojas to single and breakup the no-hitter with 1 out in the 8th.

2. Nonetheless, deGrom left after 8 innings on the verge of not collecting the win. He had gone 8 innings allowing only that 1 hit, 1 walk, and striking out 15, and yet the score was 0-0. This despite the Marlins' ace Lopez going only 5 inning with 0 strikeouts, 3 walks allowed and 5 hits allowed for a 1.60 WHIP.

Then a ton of neat Statis-Pro stuff happened in the bottom of the 8th inning for the Mets.

3. Lindor beat out an infield single. Earlier in the game both Lindor (OBR A, SP B) and Villar (A/AA) attempted steals which I do when playing the game solitaire if the baserunners speed is at least as good as the opposing catcher's throwing arm (Wallach is a Th:B). Yet both were thrown out. However, tie game in the bottom of the 8th and I held my breath and sent Lindor again and he stole.

4. With Villar up the Clutch Defense (CD) card came up, and the next card showed it was hit toward the shortstop Rojas, who has the highest clutch defense rating (CD5). A shortstop with a CD5 either makes a diving catch and turns it into a double play, or throws out the lead runner on an 11-78, but the ball somehow got past him on an "85" which is a single allowed and runners advance 2 bases - so unlikely Mets 1-0 and deGrom finally in line for the win.

5. Davis and Alonso then have an S7 and S8 on the scoresheet, indicating they had deep flies and the speedy Villar moved to 2nd and then with two outs to 3rd. Note for scoring, neither of these are really Sac Flies, because that only happens if a runner come home from 3rd. Officially these are just flyouts, but I record them that was to remind myself the runner advanced - and I know the batter still is charged with an at bat for the out unless I also have a small "1" to the top right of the S note to indicated a run did score.

7. Then the card innovation I made that really adds accuracy is that the CD-C - check the Clutch Defense of the catcher, came up twice on the Marlin's pitchers card. When Statis-Pro was invented, we didn't understand how important catchers were too defense, but now we do, so this field appears instead of passed ball after the wild pitch on a pitcher's card. This makes sense, since just having a pitcher indicated if the catcher screwed up did not make sense - but having more clutch defense ratings for the important defender behind the plate is accurate.

8. The Marlins McCann is only a CD2, and when the CD-C came up with McCann at the plate, McCann could not get to a slow roller in time, and we had our third infield hit of the inning with a 1B2 to up two on with 2 out. At this point the relief pitcher Bass was completely out of RR and would have been a PB2-4, so we brought in Propp, who despite being on the fringe card is actually the Marlins' third best reliever. See the fringe pitcher's card in the upper left of the photo - the numbers are the same for all pitchers except for the PB, which is an average pb4-7 for Prop due to his projected PB4-7. However, in this game his standard fringe card allowed two walks to make it 3-0 and then another CD-C on a 54, and once again McCann's weak defense hurt as he allowed a passed ball to make it 4-0.

9. At this point we had actually gotten to the 9th batter of the inning, which technically was still deGrom since he was done pitching but the Mets had not hit. Here the Mets got lucky. I had actually made a mistake. In their previous game I had pinch run Villar for the great hitter Conforto, and accidentally forgot to put Conforto back in the line-up for this game, so he was sitting on the bench and therefore available to pinch hit. He drove a single to right to score another run and it was 5-0 Mets.

10. Not only did 5-0 make deGrom safe in avoiding another tough non-win after a great performance, but in my league I play that if you win AND are up by at least 5 runs at the end of 8 innings, then you get credit for a 3 games to 0 sweep, whereas if you were not up 5 runs then you are credited with only a 2 games to 1 win for that game. The Mets did not even need to use Diaz to wrap up the win, Loup came in and with the "sweep" moved to 18-9 and 1st place in the Statis-Pro NL. 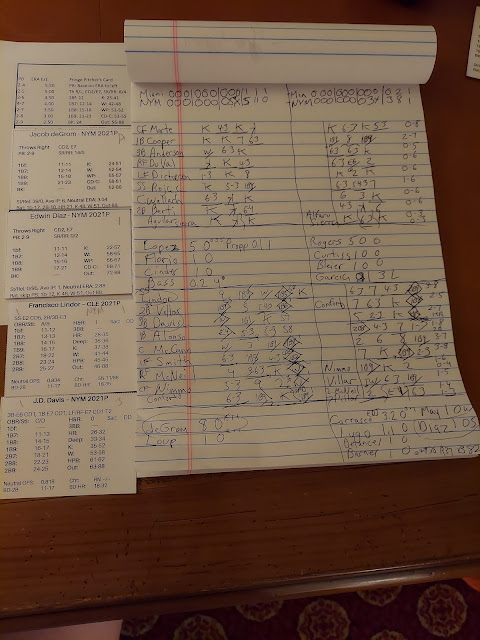 Brewers also won their series though 4-2 instead of 5-1, so they finish round 5 tied with the Mets.

One note, Hader and Hand were allowed to go 3 innings only because they came in during the 9th. Usually I only allow relievers one inning, but if they don't come in until the 9th they can pitch based just on their rr stamina. They were both tired in the 11th with Hader down to a pb4-7 and Hand a pb2-8 before the winning run scores on a ground out with the runner bearing the throw home. 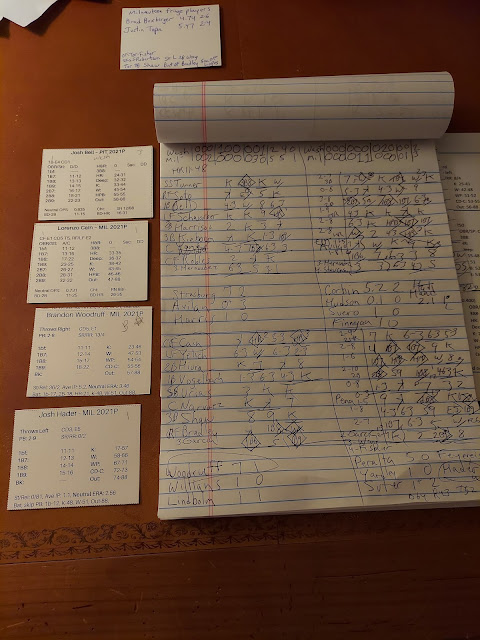 Posted by JohnPudner at 9:53 PM