As tempting as it would have been to play my Mets-Padres series after watching the real Fernando Tatis Jr. Rally the Padres from down 7-1 in the 7th to stun the Dodgers, we needed to finish playing our borderline teams to see which five teams were relegated. But really, Tatis scored the winning run after stealing 3rd to make the Padres the first team in eight years to steal five bases in back-to-back games, and Tatis was the first shortstop in history to homer three straight days in dodger stadium, the first two off former Cy Young award winners.

But enough about the real world, back to make believe for all my board game friends ...

The Cubs and Braves are both only 16-17, but both clinched finishing in the top 10 to advance to the rest of our season. Here are all 15 teams in alphabetical order with the five teams being relegated in small type, and below that details on the Cubs and Braves game-clinching games.

We usually show both games of each 2-game series at once. However, with the Cubs and Braves trying to clinch the last two spots we just played the first game of their series.

The games were virtually identical with veteran starters for both teams getting identical 6 inning, 2 runs allowed quality starts in losses that nonetheless kept their team out of danger of losing by 5 runs and thus being considered SWEPT three games to none instead of the 1-2 record they earned for the losses of 2-1 (Cubs to Cardinals) and 4-2 (Braves to Reds).

That dropped both teams below .500 with identical 16-17 records, however that guaranteed them no worse than a 16-20 record at the 36 game mark when 5 teams are relegated. The only two teams with a chance.to catch them were the Marlins and Rockies, both at 15-21, so with the Cubs and Braves 1-2 marks both were eliminated and we are down to 10 teams for the rest of the long season. 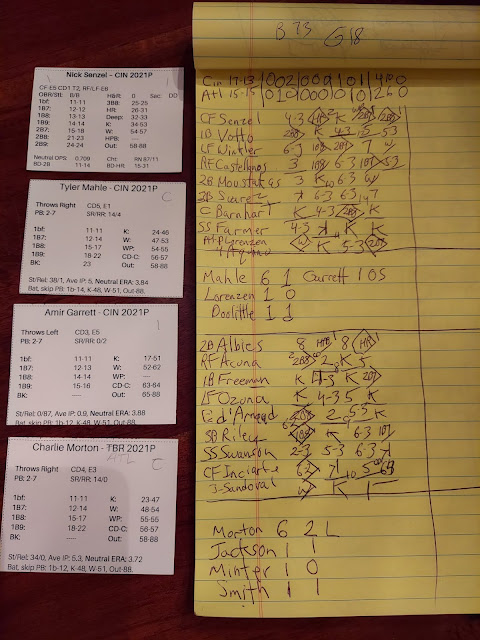 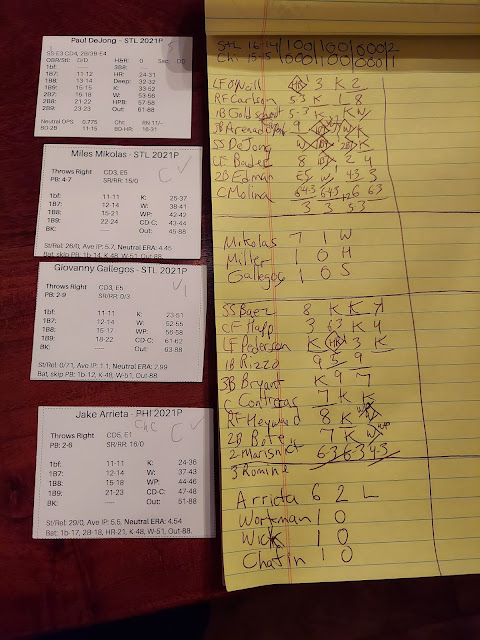