Here is just one idea for how to keep up with rosters for those who prefer to play out a current season to get a better feel for each team, as opposed to playing out an old season. I just set up for a series between the New York Mets and Milwaukee Brewers, so I use them as the example.

Periodically when I am about to start a new series, I open the depth chart for both teams, copy it with a ctrl+A then ctrl+C on each team's page in my series, and then copy both teams onto a spreadsheet to use to check the schedule. you will need to delete out a bunch of garbage rows, but end up with a sheet like this for two teams (except for the two rows at the bottom of each team that starts "On roster." and the extra narrow columns which you should insert). 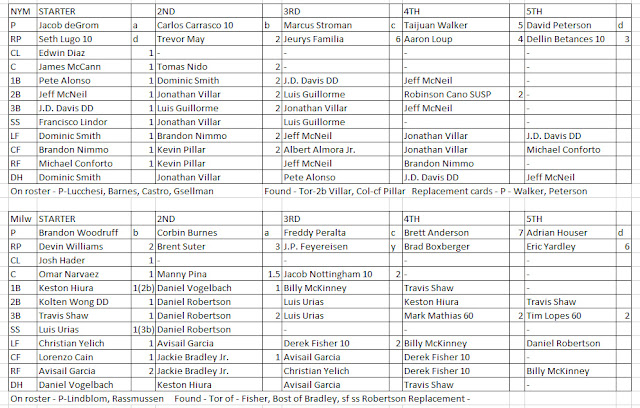 One your Excel sheet looks like that, leave it open. Since I play the current Statis-Pro season with my projected cards I open 3 tabs on the browser, the projected MLB pitchers and batters, and then the roster of the first team you want to check. If you have the depth chart sheet in Excel for your team like above, then assuming you already have your batters and pitchers cards, use the following process:
Pitchers:
1. I start with the team's pitching cards. If I see the pitcher in one of the first 3 lines (SP, RP and CL) then I first put a "1" by the card.
2. If I do not have a card for a player listed in those columns then I check the pitchers tab and search his name, and if has a card but it was with another team, I go find the card and add him and put a number above. With other games or cards obviously just check through your playing cards but use the rest of the process.
3. To get player cards to play the Statis-Pro Baseball game, click on the pitchers and batters. If you do not find a particular player card, then find the card that has the closest OPS for batters or ERA for pitchers. We recommend clicking here and typing in the player's name in the box to see his projected OPS and ERA.
4. The other possibility is that we have a card but he is NOT listed above. If that is the case I check the roster tab, and if he is on the roster I keep the card on the team. If the card does not appear either on the depth chart above I put an X in pencil in the upper left corner to remind me not to use him, but keep him with the team so if I am doing another team and come across his name so I will know where to find him.
5. You will notice only one of the pitchers above on each team still has a "1" by them in that screen shot. Once I have all the cards I decide where I want to play them, and for the four pitcher cards I want to start, pencil in an A, B, C and then D for the 4-man rotation and then put those numbers on the chart above. For the relievers, I decide the order I want to use them in the pen, and put a 1 by the closer, 2 by the second best pitcher etc. and pencil that on the card.
Batters use the same process as above, though since they are listed by position on the depth chart there are a few tweaks.
6. If a card appears anywhere on the depth chart above I mark it and keep it, but I don't go looking for a batter card unless he appears either 1st or 2nd on at least one position.
7. Once done with the batters, I open the batters tab for any player I could not find and see if they are on another team, but as above with pitchers obviously just use the actual batters cards in your game to adopt these steps if using another game or cards. If there is no card for a batter listed 1st or 2nd on a depth chart, I look for a projected OPS and write that out on a blank card to use the Fringe Batters chart if he comes to the plate.
8. Once I have all my players, I put a 1 by anyone who I plan to start in most games (against right-handed pitchers) and a 2 for back-ups, but if I plan to platoon a player and have him start against left-handed pitchers then I put a 1.5 by them. On the actual cards I write that number above their position, but on the far left I write the number of the spot in the batting order where I plan to bat them.
I don't do this every game - just at the beginning of the season and then I do it again every four games when I am about to start my rotation over. I do also glance at transaction charts in case there is a big trade to catch the change earlier. I just want to keep the rosters relatively up to date, but I don't care that much if I may occasionally be using a pinch hitter who was actually sent down to the minors instead of one who was called up, etc.
For Statis-Pro fringe players without cards I use these two charts. Obviously using another game you may just pick an old card if a player with  similar stats. 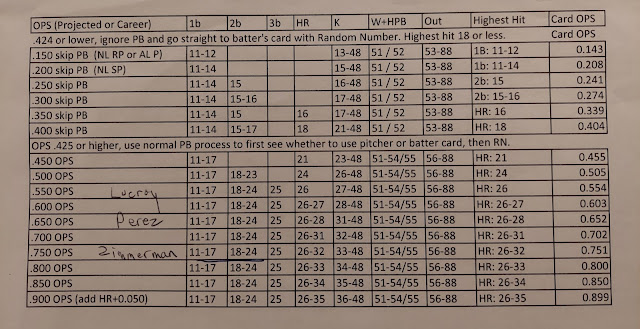 Select a Statis-Pro Player Card
If you do not have a card for a player on a team, these are instructions for a temporary cards that estimates roughly how good a pitcher or batter would be rather than running all the calculations for a lot of temporary or new players.
Pitcher and Pitcher's Batting Cards (print image below)
the top 3 cards on this image are temporary pitcher cards. The numbers are all the same except for the most important one, the PB of the pitcher. To choose that pick the pitcher's expected ERA. The best source is a "Projected ERA" but if you don't have that you can look at career numbers or take your best estimated guess. The bottom two rows are batter cards for pitchers or very light hitting batters. Find an estimated batting OPS to choose that card. Normally give AL pitchers the first batting card (.150 OPS) and NL pitchers the second one (.200 OPS). However, if a pitcher or some other light hitting batter has a career OPS of around .250 to .400 then you can use the appropriate card on this sheet. In all cases with these batters, when they come to the plate skip the PB roll or fast action card, and go straight to the Random Number 11-88 to see the result on this card. There is no chance for clutch batting (BD) on any of these cards, and always use the Cht of P instead of an SN, RN, LN, SP, RP or LP. 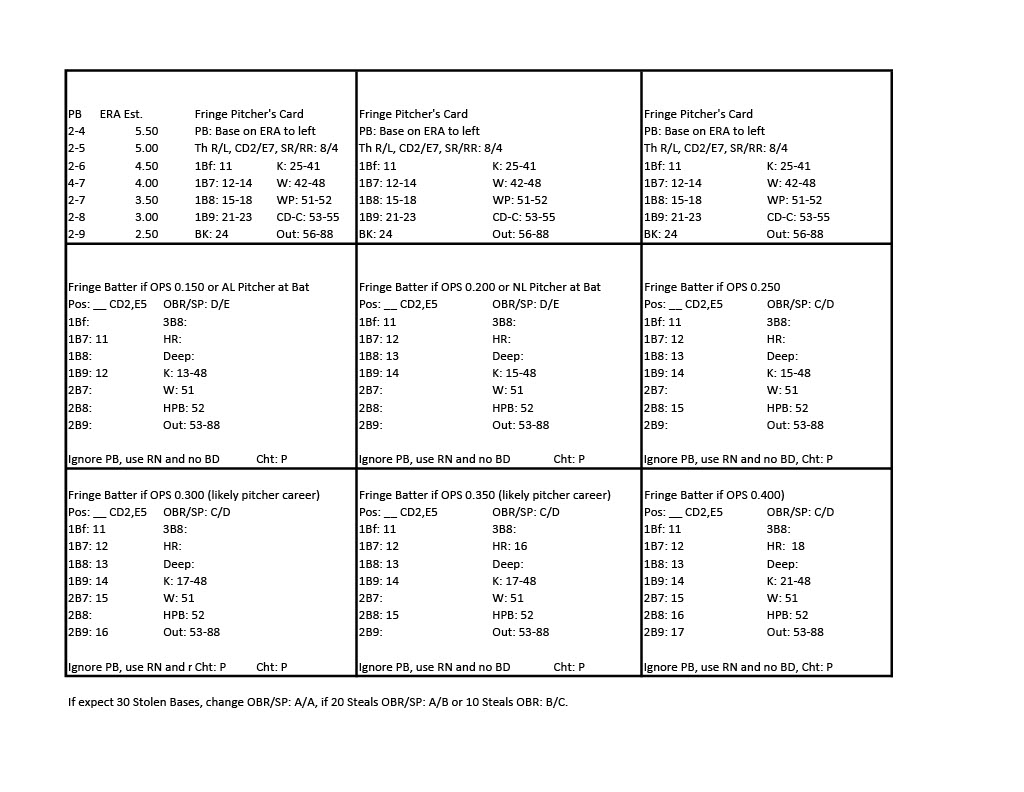 Batters' Cards (click on image below and print)
Print copies of the sheet of cards below. Anytime you do not have a batting card for a player, estimate his OPS. You can use a "Projected OPS," or for a strong hitting pitcher you can use a Career OPS or just take your best guess. Pick the card with the OPS that is closest, .450, .500 etc. If the OPS is .424 or less than you will use one of the batting cards on the sheet above. 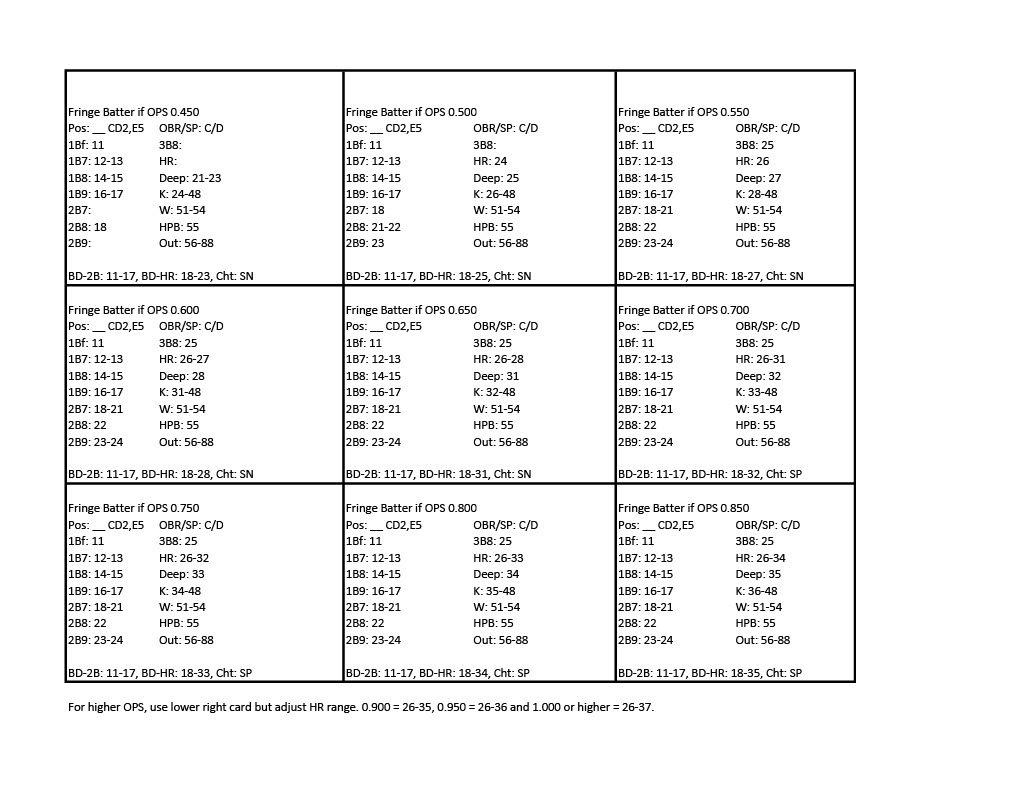 Extra Pitcher Cards
The following is an extra sheet of just the pitcher cards from the top row of the image above. Since you will most often need extra pitchers that rotate in our out of a team roster. 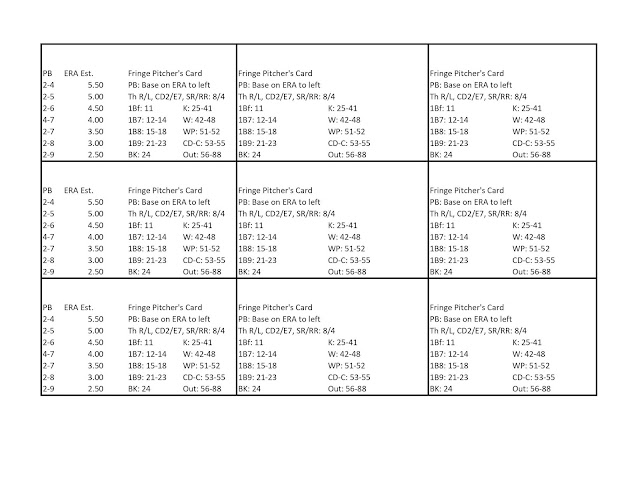 Posted by JohnPudner at 6:52 PM