Above are the current Statis-Pro NL Standings and the current cutoff for the five teams who will be relegated at the end of the remaining 6-game series. Teams with an opponent listed under "Next" still have a series to play before the cutoff. The only teams that could still drop and be relegated are Atlanta and Chicago, while the only team with a chance to move up is the Giants - but in all cases this would take 6 game to none sweeps (wins by 5 runs or more in both games of the series to get credit for a 6-game to none series win).

The Marlins needed to win both games against the last place Pirates twice, one if them by at least 5 runs to guaranty their season would continue.

Anderson and Dickerson did their part in a 7-2 win and get the 5-run sweep credit in the opener. At that point all they needed was a win again Kuhl, a pb 2-5 pitcher.

However, Kuhl got through 5 innings down just 2-1 and a double switch was set up. With Kuhl scheduled to lead off the bottom.if the 5th, the pitcher batting spot was moved to the 8-spot and Evans batted to stay in the 9th spot and play right field. Evans walked, and Hayes stroked a 2-run homer to put the Pirates ahead.

That let Stratton come in and throw 2 scoreless innings (he averaged 2.1 innings pitched, and any pitcher to average at least 2 innings can pitch 2 in our game. While the Pirates don't have great stoppers, Stratton is solid and Crick and Rodriguez are both above average at pb2-7, and they both added a scoreless inning for a 4-2 win and a series recorded as just a 4 games to 2 win for the Marlins, leaving them 15-21 and likely done for the year. 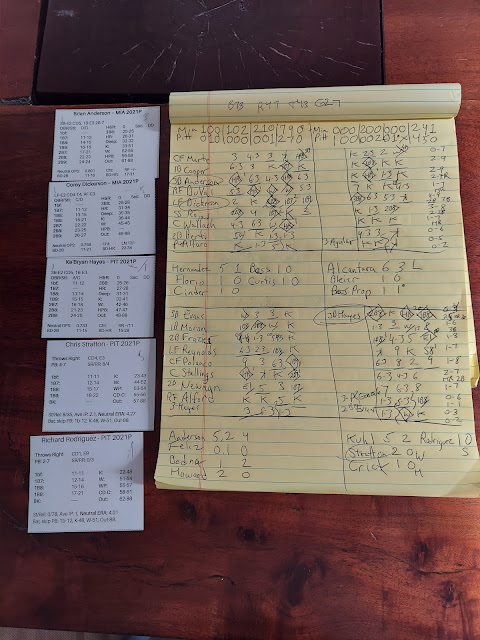 Posted by JohnPudner at 3:09 PM