Our most "boring" three series of the year wrapped up our NL inter division round robin. Basically the Reds and Brewers still needed the chance to beef up their records against the hapless Pirates, and the now depleted Nats against the also relegated Marlins.

However, the first of these final games yielded some suspense, as the Reds needed to go at least 2-4 vs. the Pirates, or the Phillies would snatch the last qualifying spot and the Reds would drop to relegated.

The Reds clinched with a 10-3 sweep in the first game, as rookie of the year candidate Jonathan India reached base 4 of 10 times in the series in which 12 of the Reds 13 hits went for extra bases. The Reds then passed 5 other teams when Mahle, Sims and Garrett went through the line-up 3 times allowing only one baserunner, a walk. Polanco then spoiled the no-hitter with a 2 out double in the 9th off Garrett, but the Reds won 4-0 to take the series 5 games to 1 and improve to 44-40.

With that win we have a phenom in the standings below - all 10 teams would make the 6-team playoffs if the season ended today. The 5 teams the Reds passed are all 2 games above .500, meaning they are all in a tie for 6th place. The Nats and Cubs likely fall now that they are playing with their depleted rosters, but still a thrilling final run.

Here are the final records for the relegated teams and then those that will continue in our 2 divisions. Results of the final 2 relegated series below. 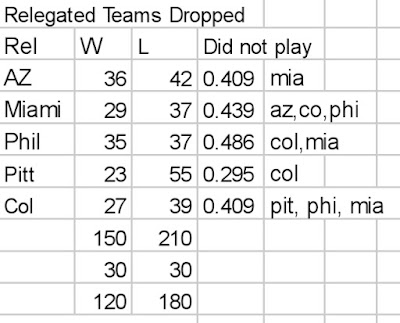 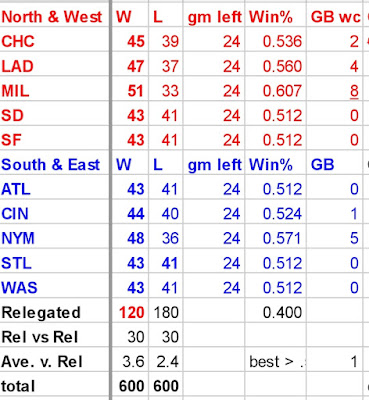 The best in our game played the worst, so no surprise the Brewers won 5 games to 1 to knock the Pirates below a .300 winning percentage to end their season.
Four Pirates errors resulting 2 unearned runs to waste a great outing by Keller in a 3-1 Brewers win. In the second game former Rays SS Adames had 2 doubles and 2 homers in his last 4 at bats and led a 9-0 sweep. The Brewers will enter divisional play with a 3 game lead over any other team in either division.
Marlin Bryan de la Cruz debuted with a double on a 2 of 5 game and 12-11 win in 11 innings the nightcap after Corbin pitched the Nats to a 1-0 win in 10 innings in the opener.

Now thar these "boring" three series are over the 5 relegated teams are done for the season. The actual contenders start to go through 20 divisional series (4 for each qualifier, one each against each of their "South & East" and "North & West" Divisional foes).

At that point the 2 divisional champs get byes and the next four best records overall play wild card series, while the worst 4 records will be dropped.