In looking at what is left of the Cubs cards aftrt their fire sale, it is easy to see how the real Cubs have lost 11 straight in real baseball. However, in statis-pro they caught a break from a z-play injury ...

The Phillies were relegated long ago, but actually had climbed back to a 24-24 record to come to Wrigley with a chance to beat up on what was left of the Cubs and make the case they should be put back in the 10-team league.

However an early collision between Gregorius and McCutchen made them miss almost the entire two games.

A trio of Cubs took advantage with 5 homers and incredible defense in 4-3 (11 innings) and then 10-5 wins. Heyward had 2 homers and threw 2 Phils out at home, Contreras hit a homer and made a clutch defensive play few catchers could have made (clutch defense 5) in extra innings, and new power phenom Patrick Wisdom added 2 homers.

It was also fun to make a card for speedy center fielder Rafael Ortega who has popped up to the majors several times in the last 10 years and has a spot to play after the Cubs firesale. 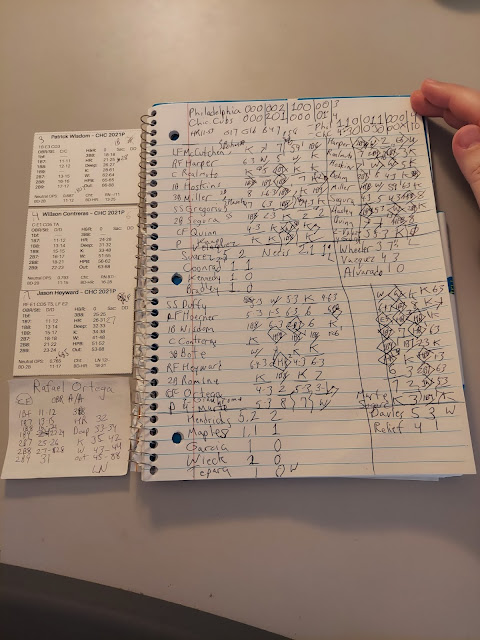 Posted by JohnPudner at 3:41 PM