Twice Frazier (top fielding ranking with an E1, CD5) turned double plays on balls that would have been errors before he was traded to the Padres (E2-10 and E3-10 were the error readings). Even more spectacular his CD5 turned a 76 from a run scoring single like it would have been for a CD1, 2, 3 or 4 at second base. An 11-78 is at least one out for a cd5 while only an 81-88 is a singke that would have scored Trea Turner from second base in the top of the 5th in the nightcap, which woukd have given the Dodgers a 3-2 lead. Machado also had a cd5 play and hit two homers, including a game winning 3-run homer in the nightcap for a 5-3 win.

In the first game the Padres lost a 5-1 lead and lost 6-5 due to the result of 3 late deep drives.

In the top of the 6th Bellinger looked out to end the inning on an  FD9 (deep drive to right) but Marisnik dropped it for a 2 base error that let Seager score the game-tying run. Taylor, inly in the game because Justin Turner was injured on a z-play, the tripled him home for the 6-5 lead.

The Padres had two DEEP drives late, but in bith cases their spacious park (11-34 homer, 35-88 sac fly) held the ball. Profar's deep drive ended the 6th, and Marisnik's would have redeemed him as a 2-run homer in the bottom of the 9th but instead was the last out.

Tatis and Machado combined for a 7-18 series with 2 Machado homers. 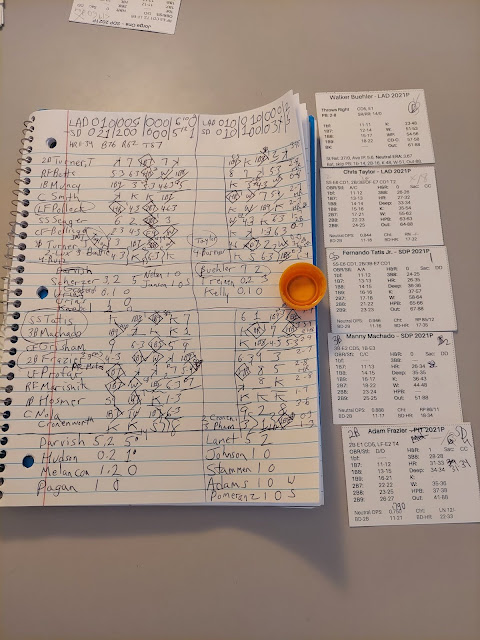 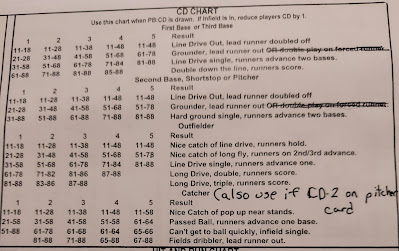 Posted by JohnPudner at 3:05 PM