Phillies Close vs. Mets and Braves Trying to Catch Reds for Last Spot

The Phillies entered their last two series with an outside chance to catch the Reds or someone for the last qualifying spot for divisional play.

Our process this NL Statis-pro season was:

1. All 15 teams played 36 games, at which time the bottom 5 were relegated meaning the would not play each other, but still play so the 10 advancing teams could play all 14 other teams. The Giants, Pirates, Rockies, Phillies and Marlins were initially relegated.

2. However, if a relegated team passed one if the top 10 teams while playing out the games they had, they could bump them. This happened as the Giants (now 43-41) blew past the Diamondbacks (now 42-48). Heading into the final series the Reds were still in danger at 39-39, though their last series will be against the worst relegated team, the Pirates. The Phillies were the best relegated team at 28-32, but their final two series were tough against the Braves and the Mets.

3. The Phillies hosted both, and if they could move up then they would advance to take the Reds place in the "South-East" division for four final series against the other divisional teams - the Mets and Braves again as well as the Cardinals and much weakened Nats.

4. We will update the four remaining games in order in this blog, then put pictures of the two series and the updated standings at the bottom.

Game 1 - Harper's 3-run triple in the bottom of the 8th rallied the Phillies to ultimately force extra innings. On of only a few SP: AA base theoves, Roman Quinn, made the last out of the 9th and the started the bottom of the 10th on second base. He stole third on a "72" - a number on which only 4 players in the game could steal third, and then tagged and scored the game-winner on McCutchen's sac fly. Phillies 6, Braves 5 in 10 innings, and at 30-33 they pull within a game and a half of the Reds.

Game 2 - The thrilling series continued with a second extra inning game. In the top of the 10th Freeman hit a 2-run homer, but in the bottom Miller hit a 2-run homer to force the 11th. Then d'Arnaud hit a 2-run homer and the deeper Nraves pen won out as Wilson continued his 3rd inning out of the pen for the win. Braves 7, Phillies 5 in 11 innings, and  the Phillies drop two games behind the Reds and desperate to sweep the Mets or otherwise need to count on the lowly Pirates to beat the Reds for them to get in.

Game 3 - The Phillies played their third straight extra inning game, but wasted 7 scoreless innings by Nola to fall on 3 straight singles in the 10th. Mets 2, Phillies 0 in 10 innings. Phils fall ti brink of elimination at 32-37.

Game 4 - Velasquez not inly win, but hit a 3-run homer as part of a crazy 16-9 win over the mets. Hoskins went 5 of 7 with 2 doubles and a homer.  The sweep for being ahead 5+ after 8 innings keeps the Phils mathematically alive at 35-37, but they would need the Pirates to get sweep credit in one of the 2 games and win both games against the Reds for the Phillies to claim the 10th spot away from them for divisional play. Even if the Reds lose the Series 2 games to 4 they would remain in the 10 teams advancing with a 41-43 record. Phillies 16, Mets 9 (sweep). 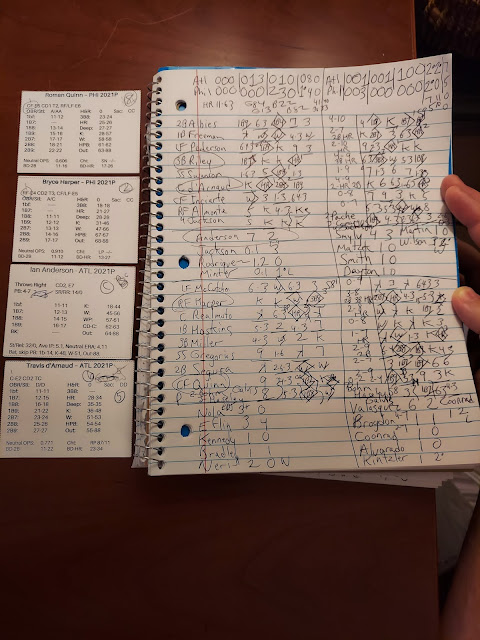 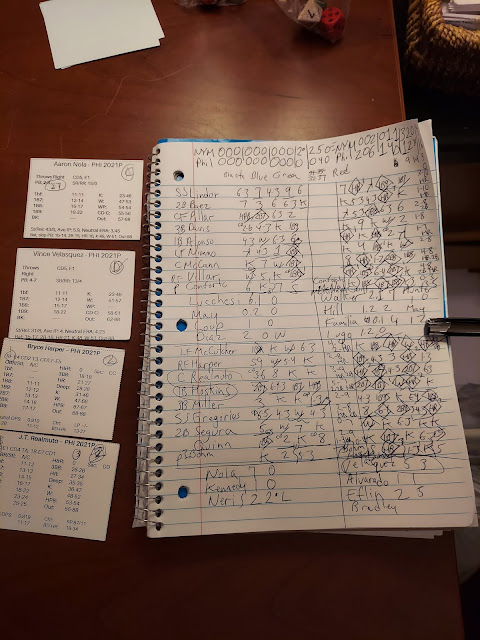 Posted by JohnPudner at 9:04 PM