If the season ended today, the Braves would make the playoffs both in real baseball and in our Statis-pro season.
How can that be when their ace pitcher and two all-star outfielders are lost for the season?
I saw the blue print in the most recent Statis-pro series, and have 3 photos to illustrated.
First a fun note, Max Fried has the third best pitcher hitting card in my game behind Ohtani and Lorenzen. Fried actually has hits from 11-26 on his card, with a 26 being a homer. As the bunt chart indicates, a card that good also gives him an AA Sac Bunt rating, so when he came up with the speedy Almonte on 3rd base, we chose to bunt. If Fried could lay down what would normally be a successful bunt, a runner on third must still then use the chart above the bunt ranges to beat the throw home - and for an on-base running (OBR:A) like Almonte that is a 50-50 shot with 11-48 safe and 51-88 out at home. Instead something I'd never had never seen in decades of playing Statis-pro... 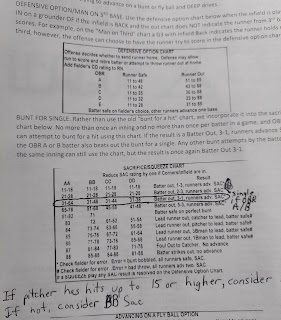 ... in fact, the Random Number was a 81, meaning Almonte not only scored but Fried was safe on a perfect bunt for an actual RBI single on a bunt. With an OBR A or B batter that could happen because they can beat it out on other counts, but for a pitcher or slower player even with a Sac:AA that would haooen inly once overy 32 times on a squeeze play.
Pederson hit a homer later after the inning would have ended if Fried's bunt had not been perfect, meaning both former Padre Almonte (4 of 7, 2 triples and a double) and former Cub Pederson (3 of 7, homer and double) continue to give the Braves enough when they seemed dead after Ozuna and Acuna were lost for the season.
Here are the scoresheet for the 9-0 sweep and rally to only lose 4-6  in the second game and win the series 4-2. This was important because they've played well against good teams, but were the only of the 10 teams with a losing record against the relegated teams until this series.
Here is the scoresheet followed by the new standings. 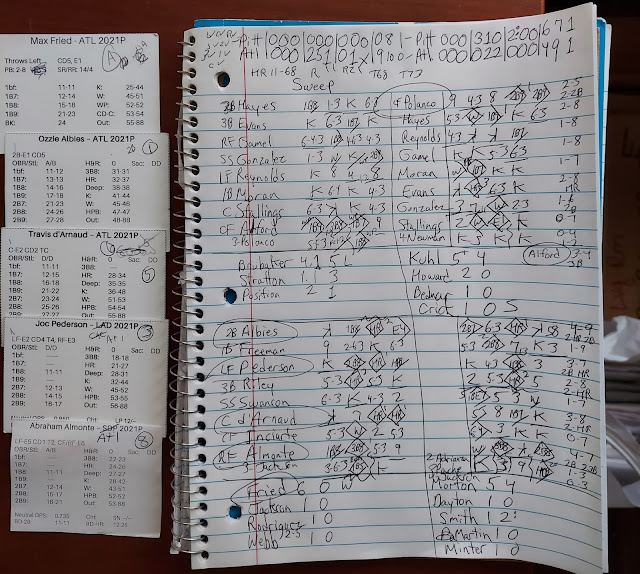 Posted by JohnPudner at 2:35 PM