B10 VABG Reminder Set-up for Game and Home Advantages

For Christmas Day Basketball we decided to use the home advantage advanced rules for some Big Ten match-ups. Under the Value Add Basketball Game rules games can be played on a neutral site, which we have done with most of the games we have tracked.

This blog is a good reminder on how to set up the game - see steps through the end of the blog.

However, we chose to play the following three Big Ten games with a home advantage:

Iowa 2021 at Indiana 1981
Michigan 1989 at Iowa 2021
Illinois 1989 at Michigan 1965
Under these rules, the home team can reverse any role of 36 or 66. If the visiting team has the ball and a "36" comes up, that would usually (but not always) result in the home team committing a foul. The home team can reverse that to a "66" so the referee missed the foul call. The reverse is also true, if the home team has the ball and a 66 is rolled, the home offense can reverse the result to a "36" which means the referee gave them a foul call that should not have been called.
Over the course of a game, that will result in a few bad calls in favor of the home team, that will result in about a 3-point advantage for the home team.
The reason we picked those teams is that it gets them all to three games played - the teams ranked #1 to #37 have all played between three and nine games, so we are trying to work through and get every great team up to at least three games played.
We can then have Loyola Marymount travel to #49 Missouri, which will mean the top 49 teams have all played at least three games.
Here are the teams ranked from #38 to #47 all-time. The number to the left is their ranking among all-time great teams in our game. After a key player from their team is listed, we then list their average points score and allowed, and then an overall ranked and their conference. So Michigan 1965 featuring Cazzie Russell is 1-1, has won their average game by a 81.0 to 71.5 score, and has a rating of 2.5.
Other Set up reminders
When you set up the game, there are adjustment reminders if you plan not to use all players, since each player starts with at least 2 points, 1 foul and 1 rebound that must be given to other players. In this case 1981 Indiana's players have enough stamina that you only need seven players. Since 2 players will not be in the game, I added two points each to Isaiah Thomas (top right), Wittman and Tolbert to start each with 4 points instead of 2 points to give Indiana 20 points at the start of the 20-20 play in the game.
For the 3 rebounds we need to replace, I always work up from the starting center (Turner) so add one rebound to him and then one to Tolbert and Kitchel, the two forwards (we still call the "3" and the "4" the small forward and power forward for easy reference, even though they are often really just bigger guards with modern teams.
Finally and most important, we need to add three fouls, and try to do it in hopes that the extra foul doesn't make anyone foul out. Obviously I added a foul to two subs, but then picked Wittman for the other extra foul since with only a "36" for fouls on his card - particularly in a home game where a 36 can be turned to a 66 - he is less likely to pick up additional fouls.
The other key in this game is the low dunk ranges and good defensive adjustments to opponents dunk ranges. If you go to the chart in teh game, Iowa is a 51-50, which means they have no automatic dunks, while Indiana calculates as a 51-48, and since that is two below no dunks it actually changes to any 51-52 being a STOP - meaning the shot is missed and defensive player gets the rebound automatically. 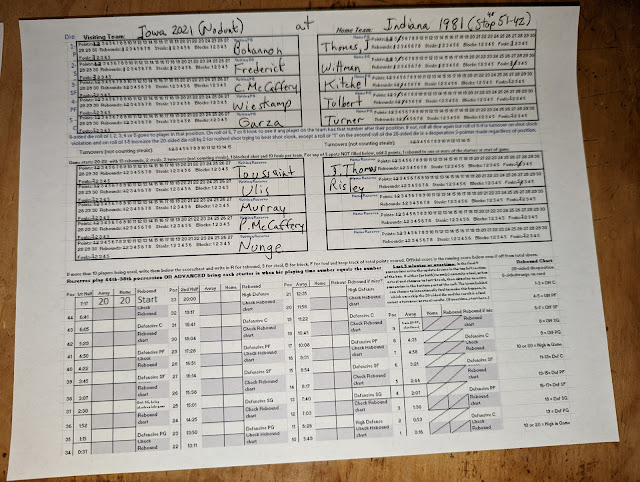 The instructions show coins being used to keep track of who is in the game, but another method is just to write the numbers on the team sheet. In this case, Isaiah Thomas and two other starters will play the whole game, so I write 1, 2 and 4 on their cards to show they will be in the whole game, but then 3 and 5 by the two players who will be replaced by a player on the top line. Once I cross those out and write 3 and 5 on the top line I will circle those because they will be in for the rest of the game once inserted.
Also wrote out who gets the ball on the 6, 7 or 8 roll as shown (we suggest using dimes on player getting an extra die roll if you use coins to track who is in the game). 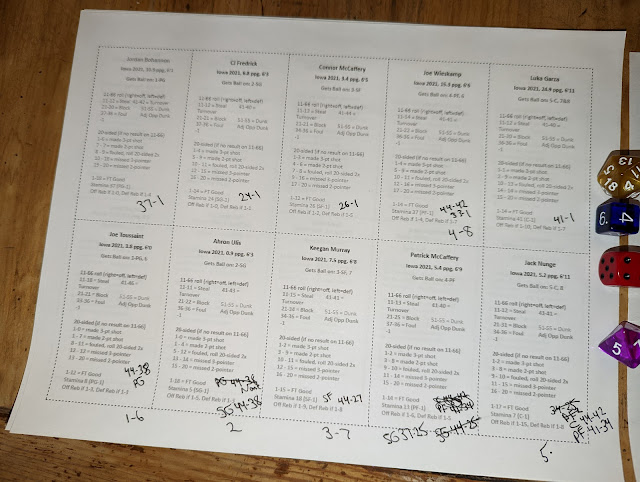 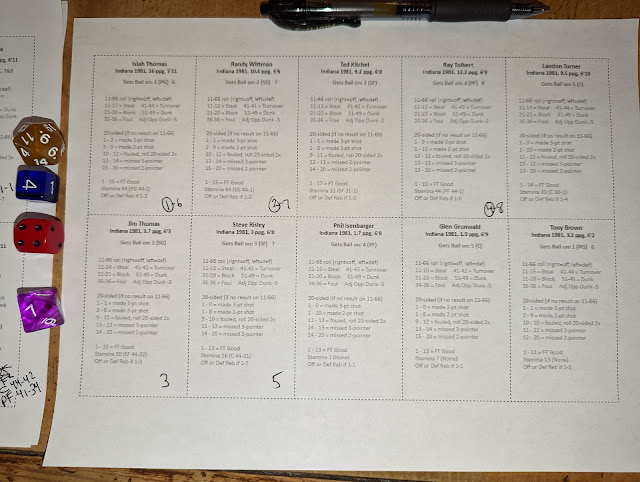 Notice Iowa is much more confusing in their substitutions, with all 10 players being used a lot and noone on the team playing the whole game. Therefore noone is circled, but I also had to play around trying to figure out the possessions each should be in the game and writing in what possessions they would play at what position. One reason I try to play each team a few times is to catch where I have not listed suggestion rotations for a team, so I will likely add the numbers written on these cards back on the master set of cards on the google docs. Also notice that Keegan Murray, who went onto be one of the top players in the country the next year, actually played less than half of games in this season while Luka Garza was National Player of the Year. 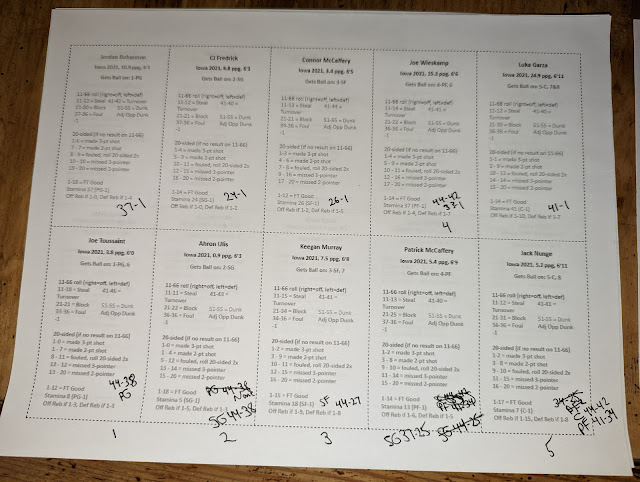 Some who play the game have had trouble getting the scoresheet to print out correctly, with the top line being cut off or all 21 images printing from the instructions when they want to just print the scoresheet. I will show these in reverse order, but the image below shows what you hope to see on your printer that will give you a clean print of the whole scoresheet.
The screen below shows how you get to this screen - click on the scoresheet, then right click on it and save the image to your computer. From that point on, you can always pull that image up from your computer to print this image. 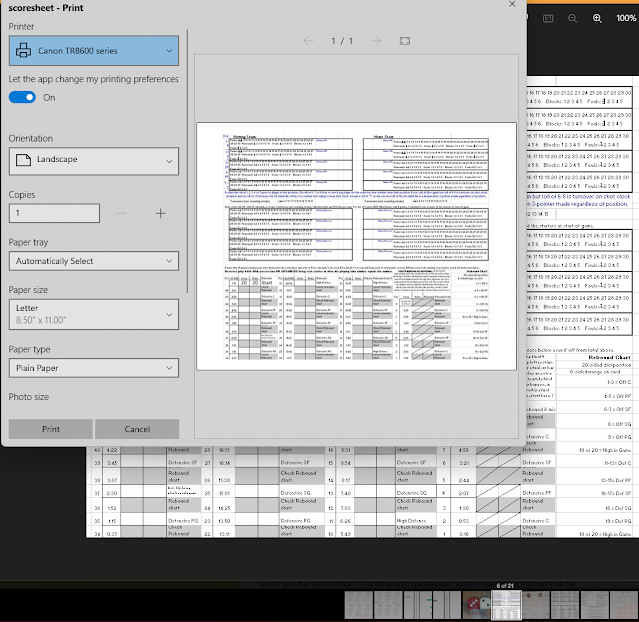 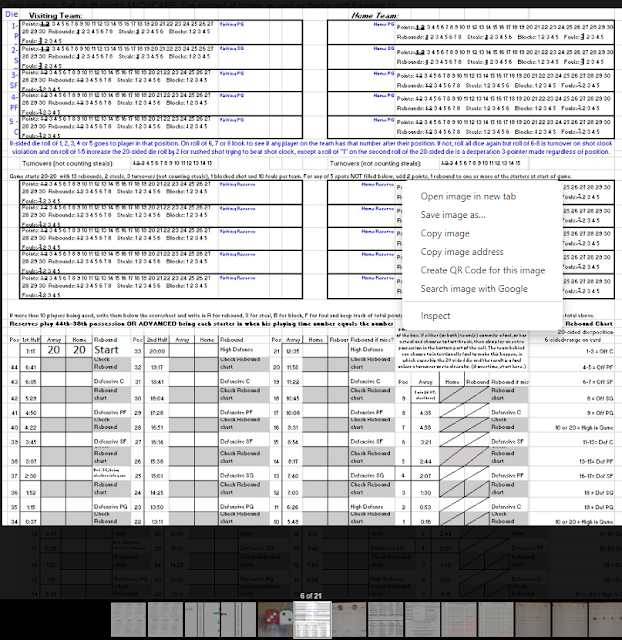