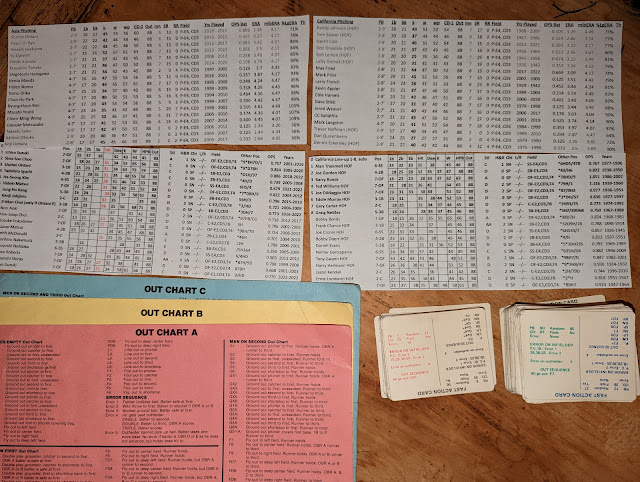 The South Korean magical World Cup soccer run ended against the heavily favored Brazil, but the debut of our Statis-Pro Baseball Classic started with a shocker against heavily favored California.

South Korean Ji-Man Choi homered in the 10th inning to give the the all-time Asian team a 2-0 win against Dennis Eckersley.

This was the debut game in our World Cup style play after finishing the 12 Teams for Statis-Pro Baseball (see this blog) game using the greatest career cards for 19 batters and 18 pitchers for each team.

Each team goes through 6-man starting pitcher rotation playing each of the three teams in its pool in a double header. If teams are tied for any of the 1st through 4th stats after six games, tie-breakers are broken by "head-to-head" then "fewest runs allowed" then "most runs scored" then "fewest innings at bat" (since a team that doesn't hit in the bottom of the 9th has a disadvantage in runs scored) then if still tied a one-game playoff.

All three second place teams and the highest ranked 3rd place team advance to a second round, from which only the top team advances to the championship round, using the same 6-game record and tie-breakers as above.

The three 1st place teams go straight from the 1st round to await the winner of the second round - and once again all teams play each other in double headers to determine the champion. However, if tied for 1st the teams play a 3-game championship series.

California is the favorite because they feature 20 Hall of Famers on their roster -  they are so deep that Tony Gwynn pinch hit in both games - and Asia features none. However Japan's Ichiro and perhaps the best player in the game today - Shohei Ohtani - will be in the Hall of Fame once eligible.

Williams and fellow Hall of Famer Joe Gordon hit DEEP drives to the wall that were caught.

Ichiro singled twice and stole second both times, but Randy Johnson threw 2-hit ball for 7 innings before Eckersley came in as the one closer who could go up to 4 innings.

In the second game Tom Seaver won to give California the split, allowing only a homer to Ohtani in a 5-1 win. Max Fried, Dan Quisenberry and Trevor Hoffman pitched the last three innings - while Hideo Nomo pitched the final inning for Asia.

The split is a huge win for Asia, as a sweep over Mexico would guarantee them at least a 3-3 mark in poll play and good shot at advancing.

Here is the 10 inning 2-0 upset win by Asia, followed by the 5-1 win from California to split the first series. 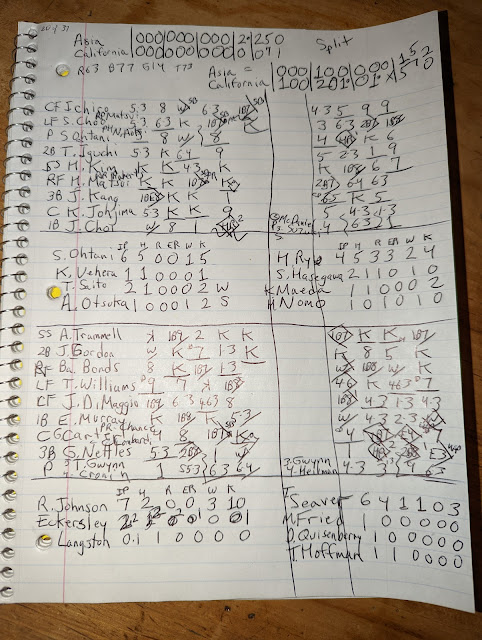