Saturday the UConn 1999 team from five years earlier likewise could not handle pressure. Another of the all-time great pressure teams, the 1994 Arkansas "40 minutes of hell" defense, forced 22 UConn turnovers in a lopsided 82-61 win.

Both superstars had great games, as Arkansas' Corliss Williamson went off for 31 points and 3 blocked shots, and UConn's Richard Hamilton scored 20. Arkansas surges to 15th on our all-time rankings and game log spreadsheet to solidify our Top 25 now that the top 37 teams have all had a chance by playing at least three games against other great teams. The highest ranked team is Cazzie Russell's 1965 Michigan team with a 1-1 mark and ranking 38th out of our 135 all-time great teams in the game.

Another fun note was a 7 year old wanted to roll the dice while I played, with me just telling him the results of the roll. He picked up on things. At one point he said, "are the really low numbers on the 20-sided dice like 1 and 2 when they make 3-point shots?" to which I answered, "unless the defender steals the ball or blocks the shot." Then he asked on another possession "why didn't Arkansas get to try to get a rebound when they missed?" and I showed him that there is only a chance for an offensive rebound on the gray shaded possessions but on the plain white possessions the defense always gets them. 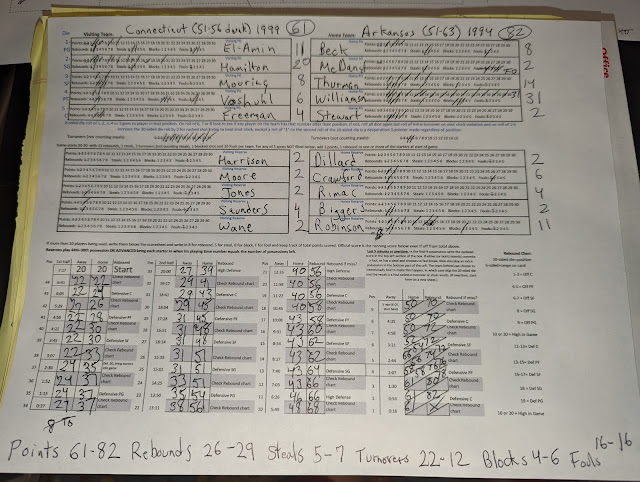