One more on the two opening lineups in the photo in the bottom - I wrote in who got the ball on which dice roll with the backups who start the game. Notice at the opening both teams had only two players with an extra number so on an 8 for either team with this lineup, noone gets a shot off, the dice are rolled on more time, and on the second roll a roll of 6-8 is a turnover. This only lasts for possessions 44 to 41 for Arkansas, because Scotty Thurman comes in the with a 3&7, so at that point Alex Dillard is a 1&6, and Darnell Robinson is a 5&8 (started game as 5&7). The 6, 7 and 8 are interchangable, they just mean that player gets the ball on one extra number on the 8-sided die roll.

Game Result: Kentucky led several times by 9 points, as Antoine Walker held super start Corliss Williamson in check despite one of the best cards in the game. Williamson gets the ball on a 4, 7 or 8 on the 8-sided die roll, and then either scores or is fouled on 1-14 on the 20-sided die. Despite him only having 6 points with 4:35 (8 possessions) to play, Arkansas managed to tie the score 58-58.

And then he went to work - scoring on 3 straight possessions to double his total to 12 points with 2:44 (5 possessions) to play. However, two of those three times Tony Delk responded with 3-pointers to keep the score 64-64.

Then we had an interesting strategy decision. Point Guard Corey Beck got the ball (1 on 8-sided die) and had a 53 meaning he could "dunk" - however he also drew an 8 on the 20-sided die that results in one of his incredible foul drawn ability (7-13 on the 20-sided die, or 30% of the 20-sided die rolls). When a player is in the dunk range he has the option of taking the 20-sided result, and the argument for doing so is that a foul or steal and fast break for a team in the last five minutes (9 possessions) creates an extra possession on the bottom half of the diagonal.

With only 2 possessions left, he could take the 2-point basket made to assure the score was 66-68 on the top part of the 2 possession, 0:53 seconds remaining, but that would mean Kentucky likely still had 2 possessions left and Arkansas only 1 unless they fouled or got a steal and fastbreak (guards can always fast break off a steal, but forwards only can on an odd number roll of 11, 13 or 15 and centers can never start a fast break on a steal).

The downside was Beck is only a 65% free throw shooter (1-13 on 20-sided die is made) so misses could leave them still 3 or 4 behind. We opted to take the foul drawn, and Beck did hit both free throws to make it 66-68 with more time left.  However, Walter McCarty hit a 3-pointers and Arkansas could not score on their final two possessions to fall short.

Kentucky stayed in 3rd in our all-time rankings, just ahead of Shane Battier's 2001 Duke team, while Arkansas moved into the all-time Top 25 with the impressive showing to follow-up on a 78-79 loss to Auburn's 2019 team. At 0-2 they will face Shaq's LSU team coming off a victory over Marquette. Kentucky did lose a narrow game to Tim Duncan's Wake Forest team before beating the 2017 Gonzaga team. The rankings are similar to www.kenpom.com, with teams starting with the equivalent of 4 games based on how good their cards and SRS was, then adjusting for every game based on the opponent's ranking and the spread. However, we give an extra 5 points for the team that wins the game in the calculation.

The game log and updated rankings are kept on this google sheet. The top 25 is also listed at the bottom of the blog. 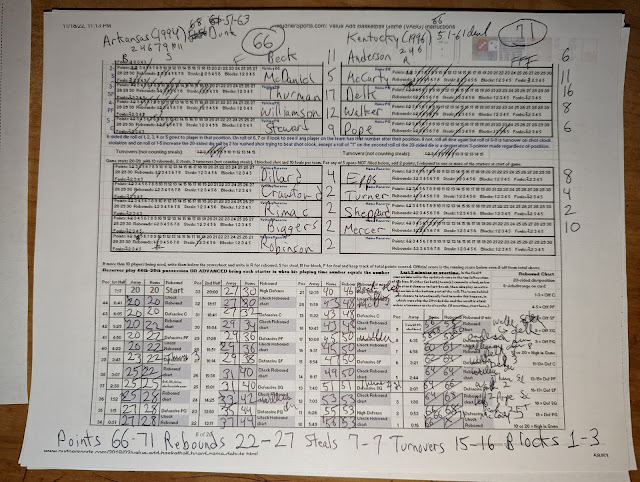 After Georgia won the SEC football title today, and I personally went to a great overtime basketball game between Jim Chones Marquette and Shaq's LSU, we turned to SEC basketball in our Value Add Basketball Game.

Clicking on the Value Add Basketball Game link and then the google doc of teams, we printed pages 6 and 57 to get a match-up of the Arkansas "40 Minutes of Hell" team that took the 1994 title from Duke, then the Kentucky 1996 that is currently ranked as our No. 3 team of all time. We are trying to get every team up to three games to see who is legit - so that provided a top 40 all-time match-up for Kentucky to show if they could beat the press and contend for No. 1. 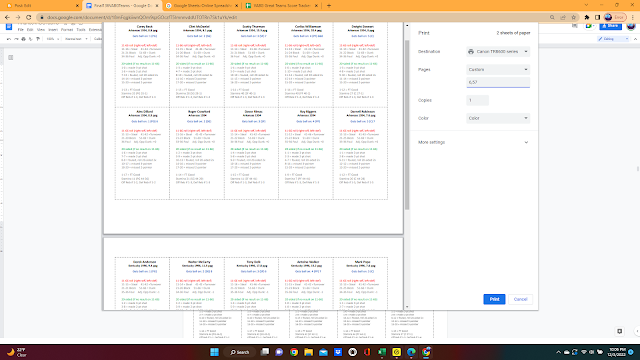 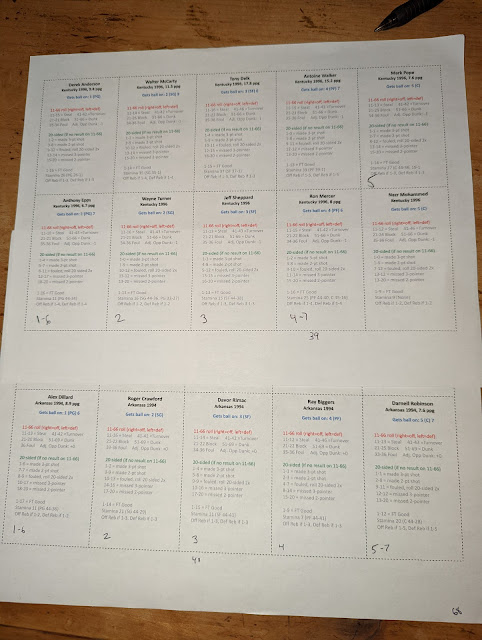 Here is the updated Top 25. The biggest surprise to some may be the 1980 DePaul team that was stunned in the second round and then first round in back-to-back years despite being a No. 1 seed - which still haunts DePaul fans.

Posted by JohnPudner at 8:24 PM