Randy Wittman's buzzer beating shot delivered a 72-71 win after Luka Garza's 3-pointer seconds earlier gave Iowa the lead. We already did a full preview of the game with tips on setting up the Value Add Basketball Game on this past blog, so here are some strategy tips and highlights.

Iowa dominated the front line while Luka Garza was joined by Keegan Murray and Jack Nunge, who all have the top block range (21-30, meaning they block shots on a 21-26 when the player they are guarding as the ball, but also can all block a shot on a 32 no matter which opposing player has the ball). The offensive rebounding range while all three are on the court is an incredible offensive 1-10, 1-9 and 1-15.

They set the ton early on the 40th to last possession (4:22 in the first half) when all three grabbed an offensive rebound before Murray scored. They led 43-35 when the stamina ran out for Murray and Ninge before the final 26 possessions of the game.

However, Isaiah Thomas led Bobby Knight's second national champion in five years back from that point on. Iowa only got one bad call against them as the road team, and that was when Ray Tolbert did score, but a foul was incorrectly called on Iowa defender Joe Wieskamp, giving Tolbert the and-one which he made to cut it to 49-44 with 19 possessions (11:22 left to play).

However, soon thereafter we made a strategy change for Indiana, realizing that while we had set up the game with Landon Turner and center and Ray Tolbert at power forward, it actually made more sense to reverse them and have Tolbert's 1-6 rebound and 21-23 blocked shots at center to lessen the chances of Garza grabbing an offensive rebound and giving a chance at blocking his follow-up shots.

This paid dividends as Tolbert blocked five shots, three times on Garza, and evened up the rebounding a bit down the stretch though Iowa still won the glass 42-33 overall (see stats on bottom of score sheet).

While the backcourt of Isaiah Thomas (13 points) and Randy Wittman (19 points) led the comeback, but it was tougher because Iowa's two guards avoided five plays that would have been a foul on almost anyone else but because they have no fouls on their defensive card (37-36 foul range means no foul range at all) which avoided a foul twice on rolls of 36 when Thomas or Wittman had the ball and three more times when a 66 was rolled which as the home team Indiana could have changed from a 66 to 36 to get a "home job" foul call against most players.

Iowa's CJ Frederick drew a foul to extend the game but missed both free throws, and then Joe Wieskamp was fouled and made only one of two to tie the game to make it 68-68 with 53 seconds left. Thomas then drove and scored to make it 68-70 Indiana, Garza (17 points, 14 rebounds) hit the three pointer to make it 71-70 Iowa, and Wittman finished the game with a buzzer beater and the 71-72 win. 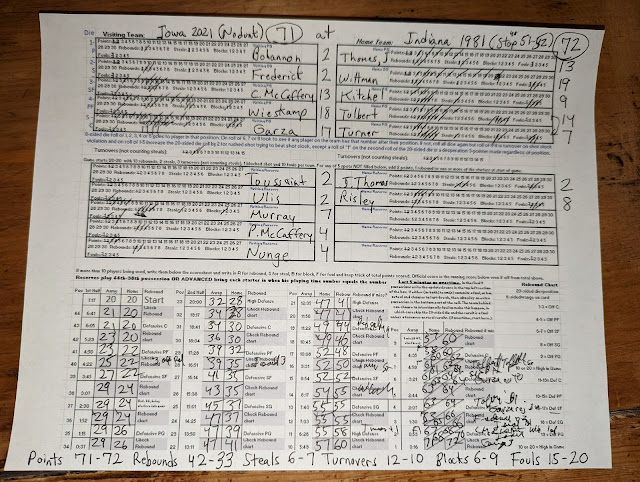 Posted by JohnPudner at 1:39 PM