In what looked like a very event match-up of heavyweights, Carlos Boozer drew the 4th foul on Larry Johnson with 17:28 to play and completed a 3-point play to make it 45-30 Duke. Johnson (18 points, 10 rebounds) survived the rest of the game, but had to guard the jump shooter Mike Dunleavy the rest of the game to avoid the 5th foul.

Duke crashed the offensive boards, with all four starters (not point guard Jay Williams) getting seven or more rebounds for a dominant 42-26 edge on the boards.

Shane Battier (26 points, 9 rebounds) hit three 3-pointers early, and Boozer (24, game-high 12 rebounds) led such a dominant 78-65 win that Duke's all-time rating in our game improved to 15.4, passing Kentucky and Kansas teams and coming within 0.1 of catching bill Walton's UCLA as the top team of all time. The scoresheet from the game is at the bottom of this blog, after the updated all-time Top 25 and teams that could make the list soon.
Click on the game to play yourself - it contains everything you need to play the Value Add Basketball game, which lets you pit any of 136 great all-time college teams against each other. To pick your two teams it is best to click on this Google doc and print the pages of the teams you want (each team is one page). I track my games on this google sheet, but play your own for free!
Arkansas is the only top 25 team that has not played three games yet. If they lose, Carsen Edwards 2018 Purdue team should slide into #25. However, Richard Hamilton's UConn is #31 but has only played one game, so could easily be ranked with two good showings.
We were planning on Arkansas playing Shaq's LSU next for an all-SEC showing, but may change to a UConn vs. Arkansas match-up to see if Arkansas can prove they belong or if UConn wins to get close or in - then have them play their third game. Once UConn and Arkansas have played three games each, all 38 current top teams will have played at least three games.
If you add 21 to the rating you would have a rough equivalent to an SRS or KenPom ratings so we'd expect UCLA or Duke to beat an average team by about 36 points, but beat an "average great team" in this game by 15. 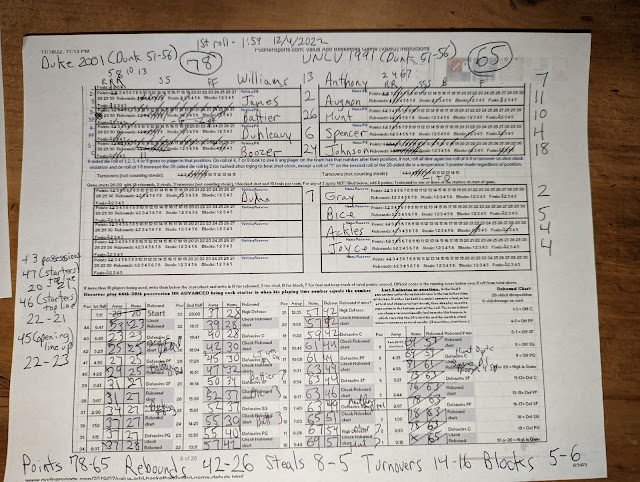 Posted by JohnPudner at 1:42 PM