After a few days of updating the www.valueaddbasketball.com ratings for the current 4,200 players, we went back to our all-time tournament using the Value Add Basketball Game cards for Rick Berry and his fast paced Miami 1965 and the last Big Ten National Champs - 2000 Michigan State. While this Spartans teams did not have the memorable superstars from their other two teams in our game who did very well in our first tournament - Draymond Green and Magic Johnson - but their leading scorer Morris Peterson was a great 3-point shooter who hit one of the greatest buzzer beaters in NBA history  (watch here).

Results of Miami vs Michigan State below the list of fast-paced teams below.

After noting that three of the seven best players in American right now are from the Big Ten in this blog, it is amazing that this 2000 Michigan State team was the 21st Big Ten national champ of the 20th century but no Big Ten team has won it all yet in the 21st century. We do rank one current Miami FL player in this top 10 of the ACC and another with a good shot at the NBA, but of course Rick Berry's 1965 Miami FL team that went 22-4 while outscoring teams 98-84 was an independent.

We estimate Miami played at the second fastest pace of the 128 great teams in our game, which means we use an extra sheet to play an extra 18 possessions in our game above the normal game as shown on the scoresheets below. These are the only teams for which we add possessions in our games - if neither of these teams are playing then the game plays out the last 44-53 possessions (depending on how many fouls in the final five minutes) on one sheet after assuming a 20-20 score through 22 possessions.

If you follow the scoresheet below, the extra 18 possessions are played on the extra sheets and for those possessions the top line of starters on each team card (see player cards below for both teams) play half the possessions while the bottom line of five reserves play the other half (the next nine). At the end of the extra sheet the score was 48-42 Michigan State as you can see from the running score to start the full sheet that would normally start the game at 20-20.

With five minutes to play in the game Izzo's defense had held Berry to 21 points but Miami had cut the score from double digits for much of the second half to 90-84.

With 5:49 (10 possessions to go) Berry scored to make it 88-84. On their next possession Berry drew a foul which first created an extra possession (in the last 5 minutes a foul or steal and fast break creates an extra possession below the diagonal) and then when he hit both free throws (he makes them on a 1-17 on the 20-sided die or 85% of the time) the margin was down to 4 points again - 92-88.

The Spartans finally got two straight stops and took a 94-88 lead on AJ Granger's offensive rebound and score. Then Michigan State's leading scorer, Morris Peterson, came through with the biggest play of the game when he hit a 3-pointer and was fouled, completing the 4-point play to make it 98-88 and MSU held on for a 108-104 win to advance.

While not famous like Berry, Peterson became a great 3-point shooter that last year during Michigan State's title run, and for another decade in the NBA. While in the NBA he hit one of the greatest buzzer beaters ever, when the Raptors appeared to have lost down three when the Wizards Mike Ruffin intercepted a pass and threw it up in the air to kill the final ticks. In a play you need to watch here to believe, Peterson waited for it to come down, caught it, and made an insane contested lefthanded 3-pointer while twisting his body to beat the buzzer.

Peterson's heroics in this simulated game against one of the fastest paced teams in history and he scored 33 points in our up-and-down high possession game. This was the other extreme from the actual national semifinals when he overcame one of the slowest paced opponents - the Wisconsin Badgers stall that held the Spartans to a 19-17 lead at halftime. In that game Peterson opened the second half with 10 points in a 13-2 run that led MSU to the title game where they beat Florida for the national championship.

Here is our scoresheet, followed by pictures of the two teams cards from the 128 teams available for free by clicking on the Value Add Basketball Game. 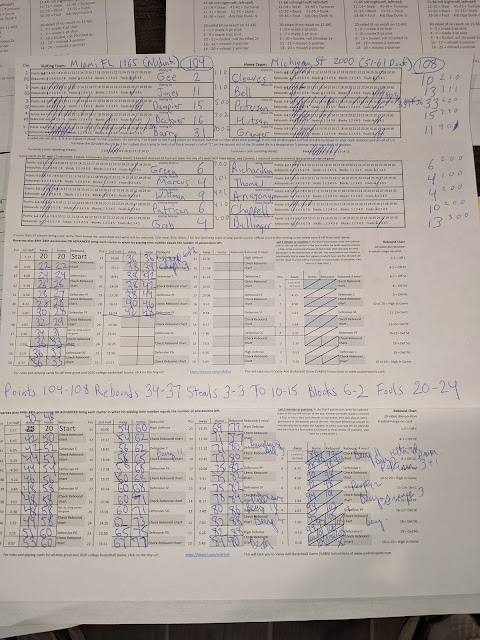 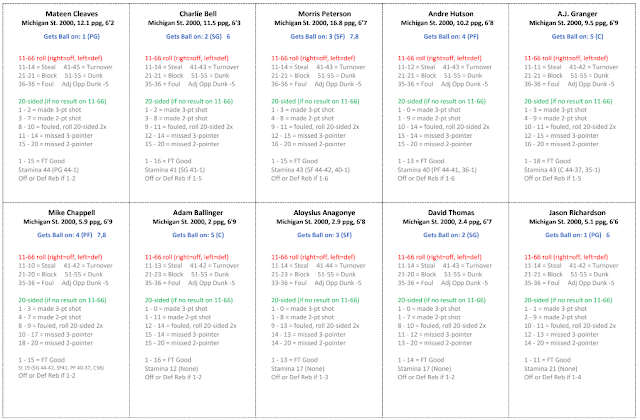 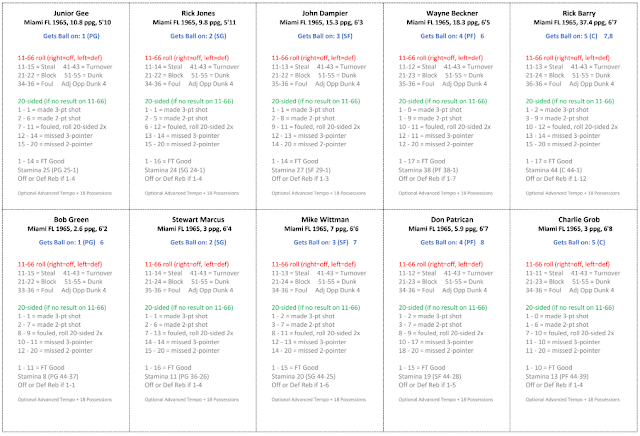 Posted by JohnPudner at 4:43 PM