Dodgers Survive to Even Statis-Pro World Series with BoSox

The teams trade 2-run homers in the first, then the Dodgers break out. Mookie Betts with a clutch 2-run HR, and two innings later a pair of Red Sox errors lead to two unearned runs. LA leads 6-2. Bobby Dalbec belts a 2-run HR to cut the lead. But the Dodgers add a crucial insurance run in the eighth on a Trea Turner RBI double. It sets the stage for a dramatic 9th inning. With a man on, Christian Arroyo lofts a fly ball, but two Dodger outfielders collide and it is an inside the park HR. The lead is cut to 7-6. Another base hit adds to the drama before Kenley Jansen nails down the shaky save, 7-6. (Series tied 2-2)

These middle three games are actually being played in Montana by our AL Commissioner, but we now know at least Game 6 will be played in Milwaukee where our NL Commissioner lives. 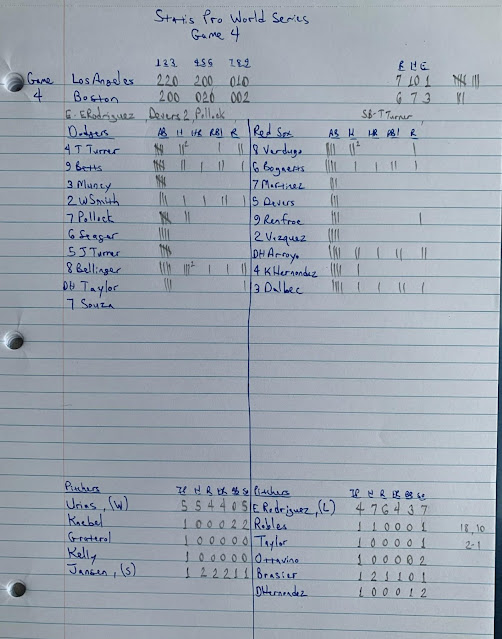 Posted by JohnPudner at 8:39 PM