We have started Game 6 of the Statis-Pro World Series. We will add key updates as the game progresses. At the bottom of the blog is a photo of the game start with our 1978 Board and out charts. Below that are the Clutch Defense Charts.

2nd inning - both teams left bases loaded in a crazy 2nd inning. In the top of the inning with one out, Buehler issued two rare walks in between singles by Renfroe and Hernandez to make it 1-0 with bases loaded, but pitcher Richards struck out and Verdugo grounded out. In the bottom of the inning Seager homered with one out and with Justin Turner on second after a single, he tried to score on a Trey Turner singled and the Random Number was a 46, the highest number he could have been safe on so as close as you can be, to give the Dodgers a 2-1 lead before they later left bases loaded as well. LAD 2-1.

4th inning - Schwarber led off the 4th with a homer to tie it 2-2. Buhler retired the next three but was still down to 3 on endurance. the Dodgers then chased Richards when Justin Turner walked and Buhler doubled. With all pitchers except the Game 5 and 7 starters for each team, Brasier (pb 2-8) came in to the high leverage situation and stranded the runners. This worked out as a perfect double switch, as catcher Plawecki who is a better hitter came in with the pitcher spot due up next so that when Brasier (pb 2-8)  finished the inning with no runners scoring he was still available to start the 5th inning. Tied 2-2.

5th through 7th inning - Buhler settled down to set down his last 12 batters after Schwarber's homer to finish with a 7 inning, 3 hit, 2 runs allowed great effort. However, the first three BoSox relievers matched him through those three innings so the 7th ended with 11 straight Dodgers also retired. Brasier (1.2 inning), Ottavino (1 inning struck out all 3 he faced) and Hernandez all perfect for the 11 batters.

8th and 9th innings. Amazingly the BoSox relievers pitched two more perfect innings with Hernandez pitching a second scoreless inning and Barnes coming in for a perfect 9th inning. The Dodgers bullpen allowed 7 runners in the 8th and 9th. Kelly came in and walked Plawecki, with pinch runner Santana (OBR A, Speed A for stealing) coming in to have Arroyo finish the game as the BoSox 3rd catcher. It looked like a bad move at first as Santana could not get a jump to try to steal second, and then Verdugo's grounder to short forced Santana at second base.

Bogaerts then dropped a Texas Leaguer in front of leftfielder Pollock, the only weak arm in the outfield (T2, while the others are T5) that let Verdugo go from 1st to 3rd. Kelly then threw a wild pitch to allow the run score for a 3-2 lead, and then hit Martinez with a pitch to leave the game and ultimately be the loser. In the 9th the BoSox added insurance. With one out Shaw pinch hit and walked. Then Hernandez hit a grounder down the first base line that required a clutch defensive play by Muncy, who is a great hitter but a CD 1 (see chart at bottom of blog). The ball eluded him for a run scoring double. Earlier in the game a grounder down the the third base line by Smith was snagged by Devers to end the first inning. After a walk to Arroyo, Verdugo doubled in Hernandez for the 5-2 final margin, as Barnes came in for the 9th to get the save.

Onto the best words in sports - Game 7!

Here is the set up at the outset of Game 6. Our 1978 Board is starting to separate but still functional, as are the charts also from 1978! 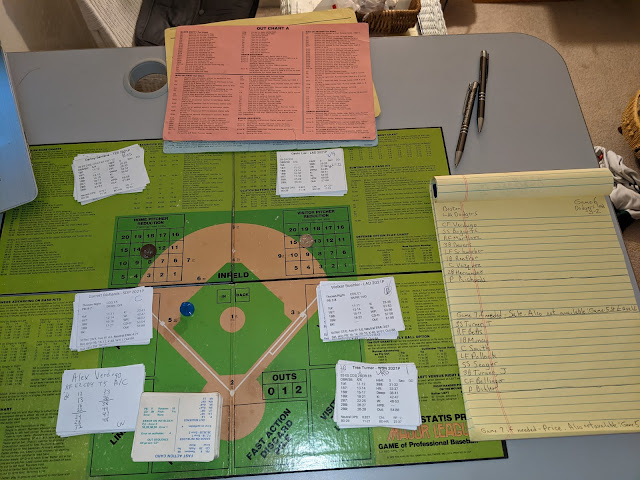 Here is the final score sheet. 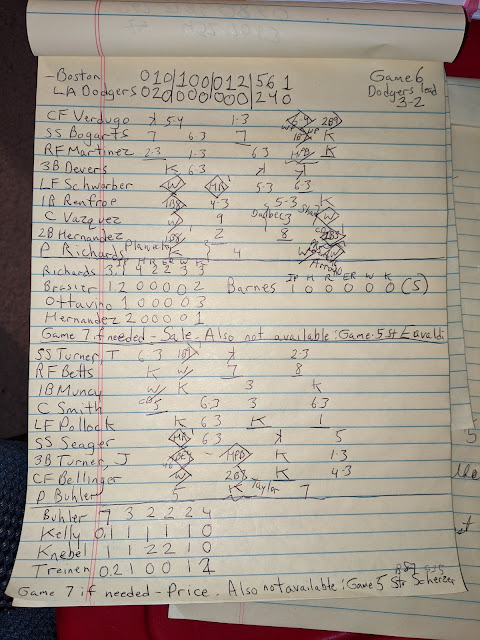 Here is the Clutch Defense chart for reference. 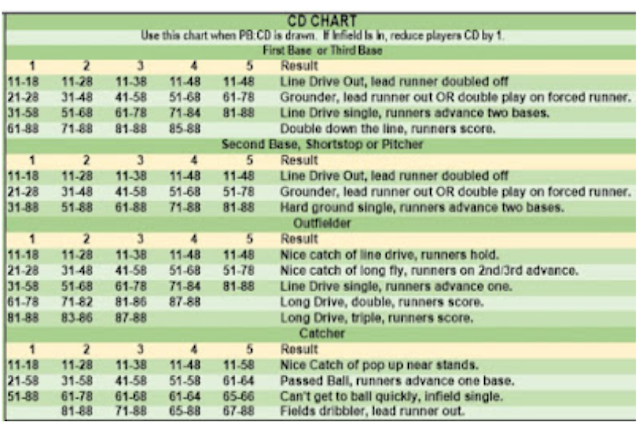 Posted by JohnPudner at 9:56 PM