Below are the Statis-Pro Cards for eight key players in Game 7 of the World Series played today. In some gamesmanship by the AL Commissioner, Clayton Kershaw was NOT available to pitch Games 3 and 7 putting former Red Sox pitcher David Price - only PB 4-7 which puts the action on the batter's card 50% of the time (think of 2-side roll combinations) on the mound. Our rule of thumb is we keep using cards unless a player is on the 60-day DL or has not played in 60 days.

While Kershaw was back in action for the end of the year for the end of the NL Statis-Pro season due to coming back for a few appearances end of September through October 1. However, his injury forced him back out of option after a brief appearance October 1 so on all counts the AL Commissioner pointed out he was NOT available for the World Series games we played in December.

On the flip side, if the World Series were played earlier this season then the BoSox could not have used Chris Sales PB 2-9 card (the most dominant, controls action 83% of the time with the batter only getting control on a 10, 11 or 12 which is the only chance at an extra base hit.

Therefore instead of the Red Sox throwing Rodriguez, who was tagged for 10 runners and 4 runs in 4 innings in Game 4, for the decisive game against Kershaw - the pitching match-up was:

The good news for the Dodgers is that Game 7 is kind of like an All-Star Game, with every pitcher available for an inning except for the Game 6 starter, meaning Max Scherzer (the only other PB 2-9 on either team except for Sale) was available.

Sale was perfect the first three innings, and Price only allowed one hit and one walk. Tie score 0-0.

Price let the first two runners on for the second inning in a row on a single by JD Martinez and Price hitting Devers with a pitch, and the Dodgers played their ace card by bringing Game 5 winner Scherzer in for his last inning as a Dodger. He gave up an infield single, but then got out of it by allowing a shallow fly ball and then striking out the last two to get out of the inning. The bottom of the 4th was the opposite. Price made it 10 straight retired to start the inning, but then for Red Sox Mookie Betts homered, Muncy singled to right, and Pollock homered. Dodgers 3, Red Sox 0.

Despite the 3-0 score, Sale was allowed to hit as Treinen came in, and though Sale popped out it was another case of the Dodgers bullpen continuing to be their one weakness. Verdugo then doubled and with two outs Martinez came through with a clutch 2-run homer. Sale then struck out the side in the bottom of the 5th. Dodgers 3, Red Sox 2.

Betts hit a second homer off Sale to start the 6th inning. Sale then struck out the side to finish an outing in which he allowed only five baserunners but four of them scored. Dodgers 4, Red Sox 2.

Red Sox fans always live with the World Series muffed grounder to lose Game 6 against the Mets. In Game 6 the shoe was on the other foot when a grounder eluded Muncy at first to help the Red Sox win and survive. In Game 7, the Red Sox were overjoyed with another similar play in their favor. After Knebel walked Dalbac, Schwarber pinch hit and hit a tailor made double play grounder to Justin Turner at 3rd base, but Turner also a weak fielder (E5) like Muncy in the other corner, muffed the double play grounder to leave 1st and 2nd base with no outs. Verdugo made him pay immediately with a 3-run homer and suddenly the Red Sox were ahead and Sale was in line for the win. Red Sox 5, Dodgers 4.

Getting to the 8th inning due to another perfect inning in the 7th by Ottavino meant the Red Sox two PB 2-8 were available for the 8th and 9th, starting with Brasier induced a double play by Trea Turner and then induced Betts to pop out to catcher. But first, in the top of the inning Dalbac homered for insurance. Red Sox 6, Dodgers 4.

A couple of games after giving up a couple of runs in a shaky save, Jansen came on for the 9th to try to keep it close. However, he walked Martinez and Devers, and then Vazquez launched a Texas Leaguer double that scored both runners to make it 8-4 Red Sox. Gonsolin came in as the 10th Dodger pitcher of the game only to allow a 2-run homer by Hernandez. Barns came in to wrap up the World Series Championship for the Red Sox. FINAL. Red Sox 10, Dodgers 4, Red Sox win series four games to three.

Note: Click on Statis Pro Baseball Advanced to get your own game and player cards, or here to try the basic cards and game for free. 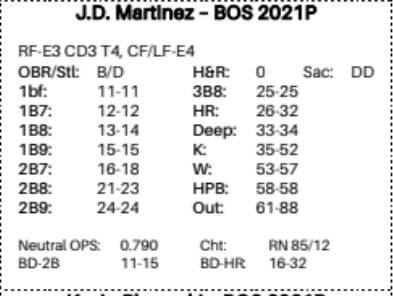 Posted by JohnPudner at 4:07 PM