We are heading back to Los Angeles (Milwaukee) for Game 6 of the World Series. We continue to use the end if season rosters to complete our season replay - which means Max Scherzer was available for the Dodgers for our greatest Statis-Pro pitchers' duel of the season against Nathan Eovaldi. Click on Statis Pro Baseball Advanced to get your own game and player cards, or here to try the basic cards and game for free.

The same 4 teams made the Statis-pro ALCS and NLCS as in the real season this year. However, both series went the other way in Statis-Pro withe the Braves and Astros making the real World Series, but  the Dodgers and BoSox advancing to the Statis-Pro Series and entered Game 5 with the Series even:

In Game 5, we imagine Eovaldi knew he needed a special effort against Scherzer and the Dodgers. Eovaldi retired the first 13 Dodgers and eventually threw nine innings of 3-hit shutout baseball. Of course Scherzer matched him with his own nine shutout innings marked by 12-strikeouts. The drama was headed to extra innings. Top of 11th with two outs and nobody aboard, two singles and a walk loaded the bases for Corey Seager who ripped a bases clearing triple. They added an insurance run and Kenley Jansen cleaned up the bottom of the inning. Dodgers win second straight 4-0 in 11 innings. (LA leads series 3-2) 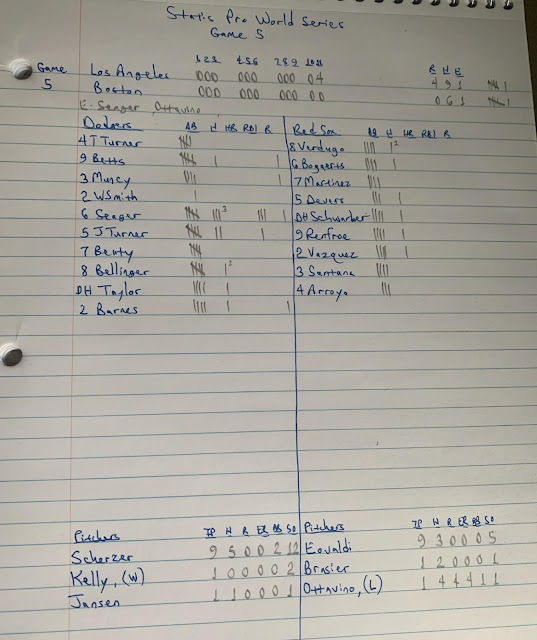 Posted by JohnPudner at 3:10 PM