Only those who play the free Statis-Pro Baseball will understand the thrills that went into the plays at the plate, deep drives and other plays that went into the beginning of the Padres season ending home stand against the two 1st place teams - the Dodgers and Brewers.

The game ended on a "37" on Fernando Tatis' card, the first in his strike-out range as a 35 or 36 would have been a DEEP drive and potential game-tying homer to force a 13th inning.

As a result the Dodgers move with a 1/2 game of the Brewers for the crucial first round bye, and the Padres move a half game behind the Reds and Cardinals for the final wild card spot, so would miss the playoffs by a half game if the season ended today (see standings below).

Scherzer pitched a dominant 7.1 innings of four hit ball and left after walking Tatis with the Dodgers leading 2-1. Darvish had fought through a lot more pressure by inducing four double play grounders in the first five innings to keep it close.

Tatis stole and scored on a Machado single, and then Grisham singled. However, the bottom of the 8th inning ended on a Clutch Defensive opportunity for Dodgers SS Seager to determine if a go-ahead single went through the infield, he knocked it down for a and got a force out, or he made a diving catch and doubled the lead runner off. As a Clutch Defense 5 (the highest, 1-5) he made the diving catch to end the inning with the score tied 2-2. This is only fair since in the top of the 8th with Seager at the plate he smashed a ball up the middle that 2nd baseman Frazier (a Clutch Defense 5 traded for from the Pirates) likewise made a diving play) to keep the Dodgers from being ahead.

With Bellinger starting the top of the 10th, Trea Turner singled him to third and then stole second. Betts then beat out a grounder to short to give the Dodgers a 3-2 lead, and then Betts stole 2nd to put 2nd and 3rd with no outs. However, Adams (PB: 2-9, the best) struck out Muncy and Smith, and then induced a pop foul by Pollock to keep it there.

And then Mookie Betts took over in extra innings. In right field he gunned out the game-winning run at home in both the 10th and 11th inning, first nailing Marisnik trying to score from second on a single and then Machado trying to tag and score on a deep fly ball. Machado would have scored to win the game on an 11-41 (better chance than of getting a 2-out hit), and out at the plate on a 42-88, and Betts drew a 43 to barely beat him.

Bellinger hit a DEEP drive that could have won the games in extras. A deep drive leaves the Padres Stadium on a random number of 11-34, and is a deep flyout on a 35-88. Bellinger drew a 38, out of most parks.

In the 12th he singled Bellinger home, stole second, and scored himself on a Muncy single for the 5-3 win. 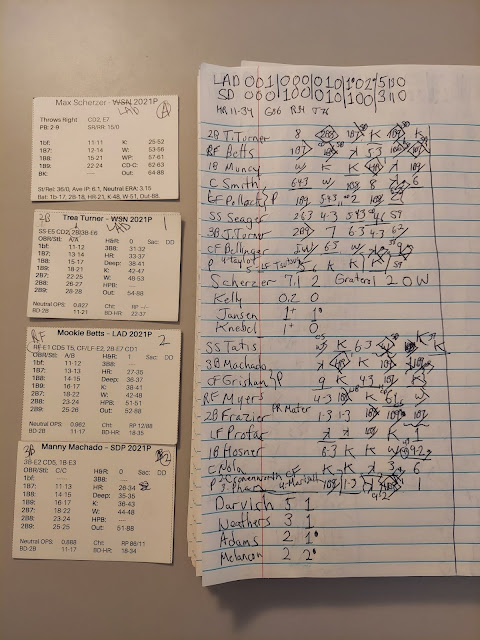 Posted by JohnPudner at 7:39 AM