Reds Split With Cards, Salvage 2 of 6 Vs. Braves

Votto exploded for 5 hits and reached 7 times in two games in hitter friendly Atlanta, but the Reds were shut down by two Cardinals result.

The incredible log jam continued as the Braves sweep for an 11-5 win gave them credit for 4 games to 2 over the Reds despite losing the nightcap 10-9. The moved the Braves into a tie for the second of 4 wildcard spots. The Reds dropped to a 5-way tie for the 6th and final spot.

The Cardinals split with the Reds to also be in the 5-way tie, as all 10 teams who advanced have had their rosters double checked and started divisional play.

We use a rotation that lets each team start either their No.1 and No.4 starter or their No.2 and No.3 starters so one team never has the advantage of their top two starters against the other team's 3rd and 4th.

Teams actually use 5- or even 6-man rotations in modern baseball, but we let extra starters come in and pitch up to 3 innings in one of every 2 game series. This was key when the Reds fell behind 7-3 to risk being swept for a 2nd straight game by the Braves, but Sims came in to pjtch the 5th through 7th innings, allowing only one run to not only avoid the sweep but help the Reds rally fir the win. 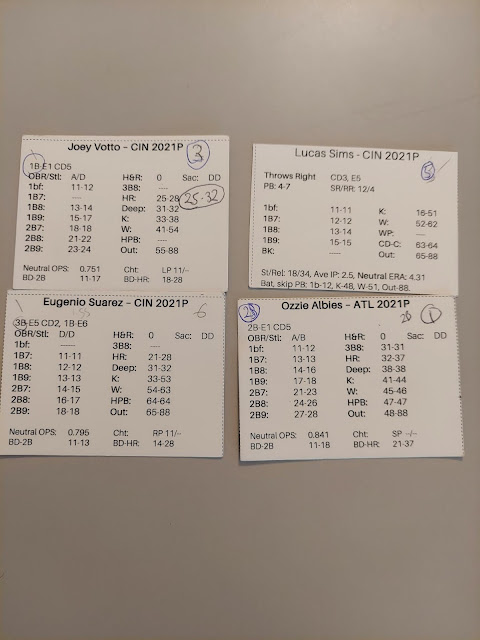 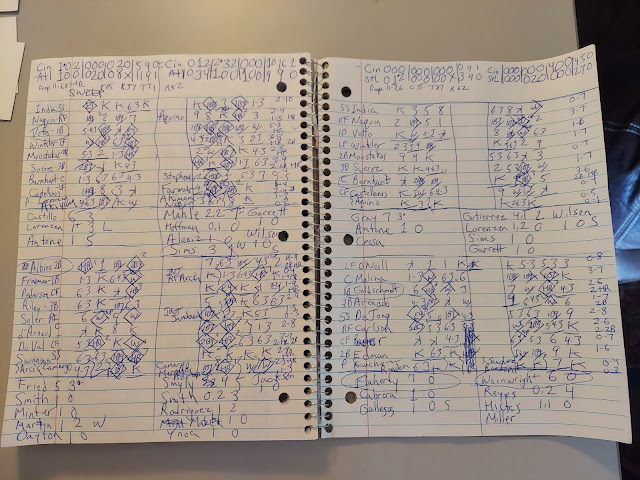 Posted by JohnPudner at 2:44 PM