With their ace Hendriks throwing a 2-hit the Cubs led 5-0 and were 4 outs from leading 5 at the end of 8 innings to qualify for a sweep and move them into an improbable playoff spot while the Giants playoff hopes were in peril.

Crawford then homered off Hendrik, who arill led 5-1 when he left after 8. However, the Cubs staff since Kimbrel has no pitcher better than a PB2-7, and the Giants exploded for 5 runs in the 9th to win 6-5 on 2 walks, a double by Yaz, single by Crawford, triple by Dubon and pinchhit double by pinch hitter Flores.

The Giants kept rolling with an 11-4 sweep in the second game off No. 4 starter Williams, a PB 2-4. The top two in the line-up, Slater and Posey combined to go 7 of 16 with five doubles and a homer after neither had a hit in the first game.

The Giants improve to +2 games above the last wildcard spot with only 6 games to play, while the Cubs are now a longshot as they host the Brewers in the season finale. 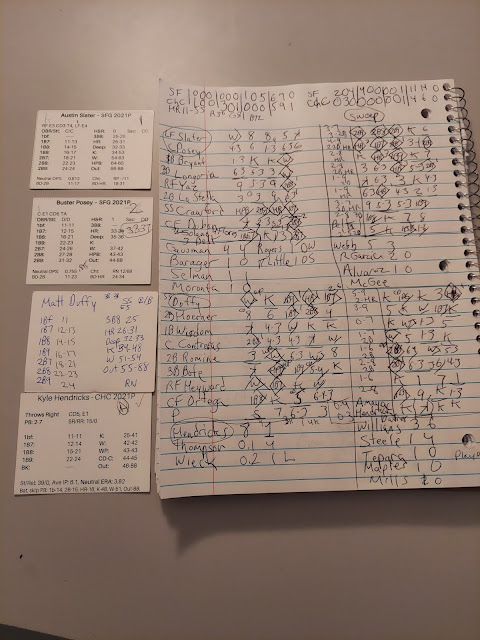 Posted by JohnPudner at 6:24 PM