Rarely in modern baseball is the stolen base more important than power hitting, but that was the case today in Statis-pro as the Mets used speed to win 1-0 as their stadium robbed homers.

They took advantage of the lowest rating for a catcher's arm, a TC for Braves' slugging catcher d'Arnaud. Veterans Morton and Hill dueled to leave a scoreless tie in the bottom of the 8th, when Smith pinch hit and delivered a one out pinch hit single.

Peraza stepped in to pinch run with a speed B/B (first number is baserunning and 2nd is stealing, with E the worst and A the best, except for a few AA on the second). Peraza attempted to steal, and while a TA or TB would have thrown him out, he beat the TC throw.

The things went crazy. With Lindor at the plate, reliever Minter argued over a ball call and was ejected. Martin came in from the pen and allowed a single to Lindor  and Peraza raced home. Lindor then stole second but did not score.

Diaz and Brad Hand pitched a perfect 8th and 9th, combining to strikeout 5 of 6 get the win and save.

The Mets almost took the nightcap with speed over power as well. Albies and Pederson hit deeo drives in the first that would have been homers in atlanta but were long flyouts in the ultimate pitcher's park.

With the Braves leading 2-1 in the 8th, Lindor (A/B) doubled and the took the unusual step of stealing 3rd base. Baez then hit a fly ball only deep enough to score an on-base running A (the number before the slash), to tie the game 2-2.

The Braves did eventually erupt in the 10th inning to win, but the split left them still 4 games behind the Mets for the NL South & East title and a bye.

After the Cards play the Nationals, we will see what the Mets magic number is with two sereis or 12 "games" left to play. 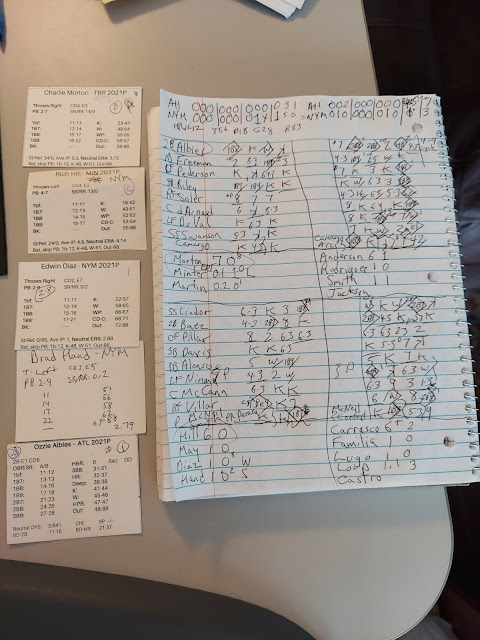