Earlier in the year Yelich Statis-Pro 2021 Projected Card would have hit a game-winning homer. However, he is one of a handful of batters to have cards adjusted, and his 25-28 HR range made a 32 a deep drive, which waa caught for a sac fly as the Giants held on for a 5-4 win.

The improved Giants' card for Brandon Crawford (27-33 though far fewer walks then Yelich) resulted in 3 homers in a 9-6 win in the nightcap, and Longoria's (27-34) had a single, double and triple and threw out two runners at home (CD5). LaStella did him one better with a cycle over the course of 2 games.

The Giants, who were initially dropped as a relegated team but played themselves back into the top 10 teams, move into 4th place for the second wild card team with home advantage based in games back. The win the tie breaker with the Reds due to a better record against qualified teams (Reds beefed up 21-9 against relegated teams to 18-12 for the Giants).

The losses drop the Brewers to 53-37, just one game ahead of the Dodgers for the best record in the NL. The Giants wins moved them past 5 teams tied for 6th place foe the last playoff spot.

The AL uses the same Staris-pro cards but does not use the adjustments, which are optional. The pitchers' card adjustments are here. 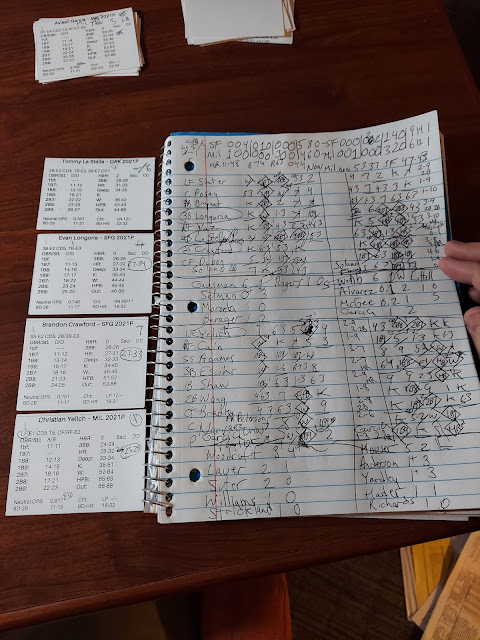 Posted by JohnPudner at 4:55 PM