Look for the feature story on the CBS Sports Site Dodds on Sports that will run down the top road teams in the country. 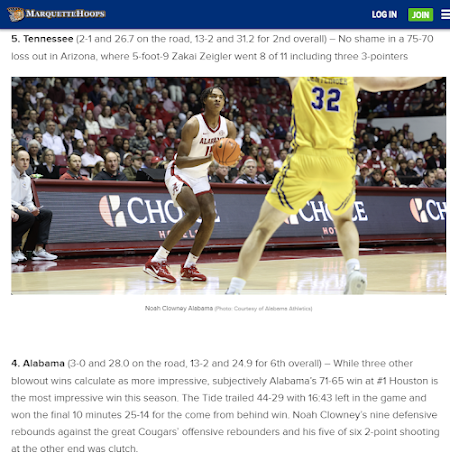 This blog is a link for anyone who wants to look further down the list of the best road teams this year, or for the fellow stat geeks who want to read the way kenpom calculations are made - below these lists.


These would be the standings (give or take a rounding error) if teams were rated using Ken Pomeroy's method but only based on the road games they played this year. Too often a team looks really dominant at home in a few early games, and then cannot handle hostile crowds. On the flip side, the teams that can handle the pressure of a hostile crowd seem more likely to handle the pressure of March Madness.
The 42 teams we did calculated fit one of two categories:
1. One of the 30 teams who were both in the overall www.kenpom.com Top 40 AND played at least three road games, or
2. One of the 12 teams who are not in www.kenpom.com top 40 but have won a road game at a Top 40 team AND have played at least three road games.
It is very unlikely any other teams we did not calculate would be in the Top 20.
There are 10 teams who are in the top 40 at www.kenpom.com but have NOT played three road games yet, so we list them at the bottom. The Texas Longhorns ranking of 26.0 in the bottom set of teams would rank them 6th in our road Top 25, but based on only two games we want to wait until they get their tough road tests in Big 12 player shortly.
How we simulated KenPom's rankings:
SoS - the strength of schedule is the average www.kenpom.com AdjME for the team's road games today rounded to the nearest number. The number on this table is then increased by +4 to give credit for the four point edge to the home team opponent, and we did include "semi-road" games but in that case only two points were added to the SoS.
For example, our #1 road team Kansas played road games at Missouri, West Virginia and Texas Tech, and those three teams average a 16.3 AdjEM at www.kenpom.com. However, because these are all true road games, we add +4 to each and the average comes out to 20.3.
Not only did Kansas beat all three, but they averaged beating them by 15.0 points, so the kenpom system adds the SoS and the margin of the scores, and together the www.kenpom.com rating if only road games were counted would be 35.3 - making Kansas the best team in the country in this small sample.
Posted by JohnPudner at 10:44 PM