The next two Statis-Pro rosters to update for a series were the Mariners and Blue Jays.

Cavan Biggio did something I don't remember happening in all my decades of playing Statis-Pro bsaeball - he hit Grand Slam Homers in both games of a 2-game series. The scoresheet is at the bottom, and while the NY Yankees are having one of the greatest seasons ever in real baseball, in Statis-Pro they are second at 2 games behind the Blue Jays, who are now 19-11 with the wins. More further down, along with the scoresheet, but first the roster update:

From our opening week team, we took out the Blue Jays cards for catcher Tyler Heineman, who was no longer on the 40-man roster, and for there pitchers on 60-day DL, Julian Merryweather, Tayler Saucedo and most importantly Hyun Jin Ryu (a PB 2-8 starter). The Blue Jays had no players to add - and remember we only add players who are starting or pitching a lot of innings and did not yet have a Statis-Pro card with the team.

The Mariners lost four pitchers (none better then an average PB4-7) who were simply not on the 40-man roster, and then Casey Sadler ((PB 4-7) due to him being on 60-day DL.  They also lost a couple of bats on 60-day DL in catcher Tom Murphy (back-up, .681 OPS) and starting outfielder and good batch Mitch Haniger.

We did add cards for three Mariners batters who did not have cards from the opening week roster check but showed up as starters on the depth charts.

The three starters from 40-day rosters without cards were looked up on the all batters sheet., and we pulled them to the top three spots here. A few interesting notes on Carlos Santana. We were not sure at first if that was the same one on the Kansas City Royals last year, and if it had not been then we would have used his projected .677 OPSto use the ".675 not on list" bolded line below.

However, it was him, and note that his deep range goes to 30, and anytime it ends in a 0 it is really two less, so the written out card goes to 28. Also note it appears from the all batters sheet that everything was calculated because he has a 87/11 (hits lefties better than righties even though he is a switch hitter) already filled in on the card. Kyle Lewis and Taylor Trammell did not have any numbers in the spot and were not identified as hitting left handed or right handed, but because Lewis was right-handed on the 40-day roster we give him the standard 88/11 for righties, and because Trammell was left-handed on the 40-day roster we gave him the standard lefty 12/28.

Here are our free hand cards for all. 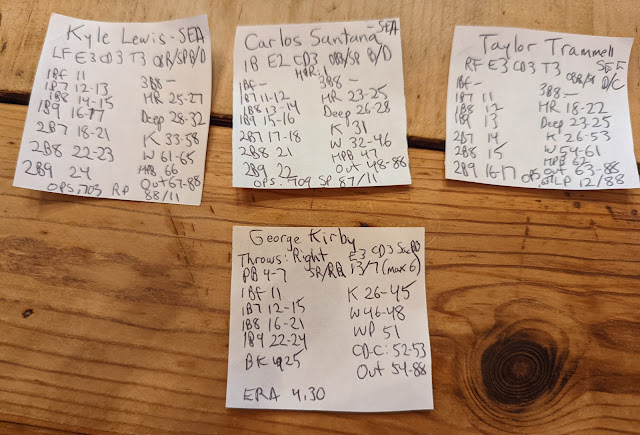 Because George Kirby was not in the opening week roster we went to the this link for all pitchers, and he was there. So we used that card, but if he was not there his projected 4.33 ERA on Fangraphs would have meant we made him a standard PB 4-7.

And now for the 2-game series of Seattle at Toronto, which from the Game Tracker we know allows home runs on deep drives of 11-68 in Toronto, with 71-88 being caught with all runners advancing.

Cavan Biggio's homers in consecutive games led a Blue Jays barrage on Seattle pitching for 8-7 and 10-1 wins. The second game counted as a sweep, so the Blues Jays were credited with winning the series 5 games to 1 to move ahead of the Yankees for first place at 19-11.

It appeared the Blue Jays would sweep the first game when they jumped to a 7-0 lead on Biggio's Grandslam to cap a 7-run 3rd inning.

However, Seattle's amazing 21-year old Julio Rodriguez hit the second of back-to-back homers to cut the lead back to 7-2, and a 5-run 6thtied the score and made the Blue Jays use all three of their PB 2-8 relievers (meaning they could not pitch in the second game) before Chapman hit a game-winning homer in the 8th for the 8-7 final.

The second game sweep was not in doubt, with Gausman going 7 strong innings allowing only one earned run, which was key since the top relievers were gone.

Our last two series of this 7th round are Cleveland vs. Minnesota and the Chicago White Sox vs. the LA Angels.

So far in our season 23% of the games have counted as 3 games to 0 sweep, meaning the winning team led by at least 5 runs at the end of the 8th inning without having used their top reliever who was available. The MLB average in actual 3 game sweeps has been slightly higher at 28%, but because we only play the top 10 teams in each league, teams do not get to beat up on the worst 5 teams where sweeps would be more likely. 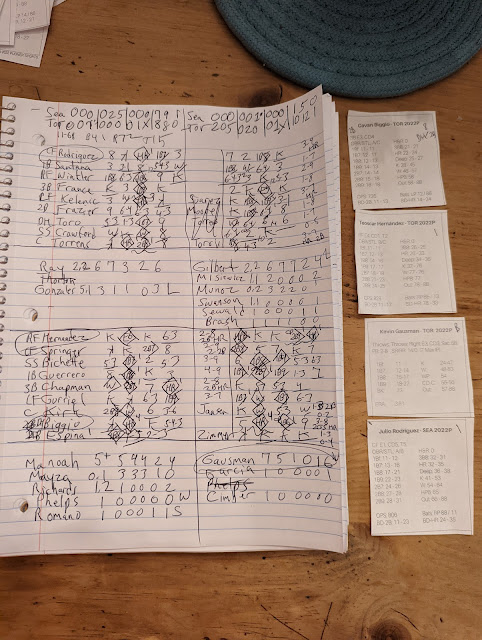