The Twins blasted the Rays 11-5 for a "sweep" in the opener, then the teams had a 9th inning of strategy that shows why baseball makes the best board games.

The Twins Emilio Pagan waled the Rays Mike Zununo to start the bottom of the 9th with the Twins clinging to a 3-3 lead.

The Rays replaced the Zununo with the speedy (obr-sp A-A) Brett Phillips at 1st base.

Phillips attempted to steal and the random number was 55, which on the chart the runner is out stealing if the catcher is a TA but otherwise steals - so Jeffers defense was not enough and Phillips stole. Pagan then three a wild pitch on a 61, putting the speedy Phillips on 3rd with no outs and a tying run 90 feet away.

The infield played in, meaning even on a hard grounder, Phillips would have a 50-50 chance of scoring - unless the grounder was hit back to the pitcher. And that's exactly what happened twice in a row, with Diaz and Kiermeier hitting back to back grounders right back to Pagan.

The defensive switch wasn't enough to stop the stolen base, but it was enough for the final catch and game over. At the end of 6 series for each team, the Twins are 19-17 and in 4th place of 10 teams. 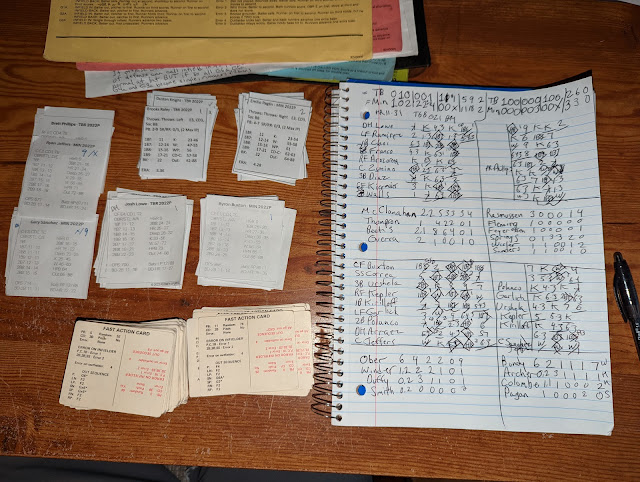 Posted by JohnPudner at 6:29 PM