The Rays hoped the return of Brandon Lowe's card from the 60-day DL and acquisition of the David Peralta from Arizona would bolster the worst of 10 teams in our AL Statis-Pro league.

The Rays have averaged only 3.4 runs per game (1st chart) while the Red Sox have had the 2nd best pitching in the league (3.9 runs per game allowed). But J. Lowe hit a 2-run homer and B. Lowe singled and eventually scored to make it 3-0 over Eovaldi in the first inning. That was enough for Corey Kluber, who allowed only 6 baserunners and 1 run over 7 innings in a 5-1 win.

However, Eovaldi and 8 other pitchers allowed only 4 Rays runs in the next 17 innings to prevent them from scoring another run to get the 5-run sweep, and then falling 2-6 in the second game for a split.

Trevor Story was the Red Sox hero in the nightcap, hitting two home runs, one of them an in-the-parker off a Z-play (center fielder crashing into wall).

On the 2nd chart, you can see Tampa is one of two teams with a red percentage indicating their Statis-Pro cards have a winning record 10% below their real season record vs. the top 10 AL teams (the Astros are the other. The two tams that have won 10% more in Statis-Pro are the Blue Jays and despite being only .500, the Angels. The majority of teams are about the same in Statis-Pro and the real season.

The scoresheet and key cards in the game are on the 3rd image. 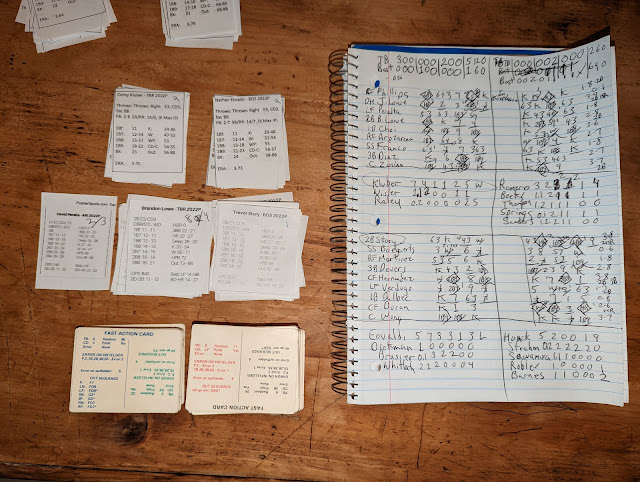 Posted by JohnPudner at 4:28 PM