The Guardians stroked 15 hits in consecutive games, including Ramirez and Reyes combining for 12 of 19 with 5 homers. Twins had chance in 9th of last game with Urshela at plate as tying run, but a "47" as pictured on closer Clase's last number in his strikeout range ended the game 7-4 Cleveland. They won the first game 10-3 for sweep credit and moved ahead of the Twins in standings. 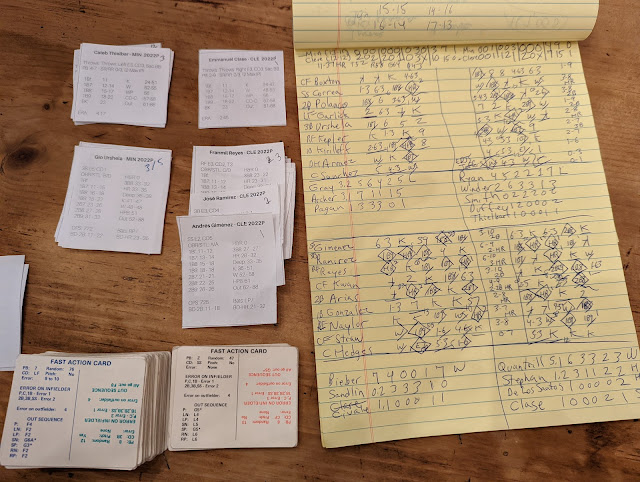 Setting up for the battle of AL Central Teams (though in Statis-Pro it is just one 10-team league) the Indians did lose Bobby Bradley, who had been starting, but the addition of Oscar Gonzalez to the roster seemed to fill his spot fine with a home run range of 31-34 even before the deep range of 35-37 that is a homer one in three times in the average park.

Probably won't use their other addition, Luke Mailed, much as he is a rare card with no home runs and his ops is one of the lowest at 0.583.

The Twins however were decimated by a half dozen pitchers either on 60-day DL or not on the 40-man roster any more. The one pitcher they added was Devin Smeltzer, who is just a PB 2-6, but can give up to 5 innings pitched.

Here are the Twins lost to the team in this roster check. 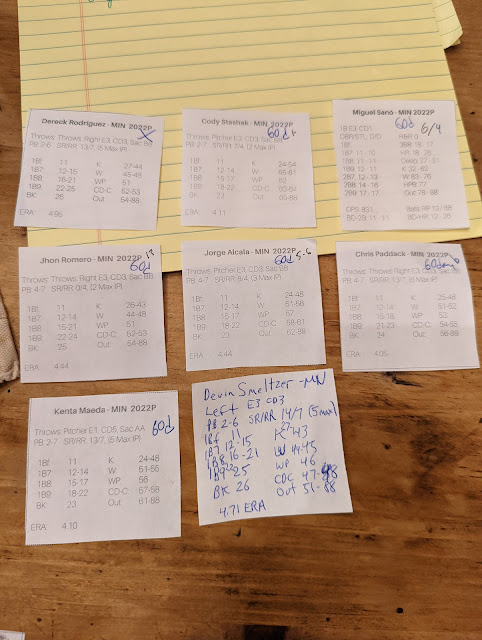 Next the results between the two teams - and always uphill when you face PB: 2-9 Shane Bieber.

Posted by JohnPudner at 8:57 PM