After detouring to finish a Value Add Basketball tournament during NBA Finals, and then to get in a Statis-Pro NL tournament we resumed to our AL season.

We pulled out the Statis-Pro Cards for Series 7 - the New York Yankees vs. the Tampa Bay Rays - and compared them to the 40-man rosters in this blog.

A few players dropped from each team due to not being on the roster listing or now being on the 60-day DL. The Yankees had no new players on the roster that needed to be added, but the Rays did have four additions. As noted in the blog, we only go to the trouble of finding or creating a player card if the player is starting, in the rotation, or a closer. Here are the four such Rays we did not see and thus went to the sheets for the card.

We were missing three Rays pitchers cards, so we went to the all pitchers sheet and found these three.

I believe I had just missed Corey Kluber's card, but this is easier than finding it. Not that the extra pitchers sheet did not note whether the other two pitchers threw left or right. However, the 40-man roster blog does, so we knew Poche throws left and Shane Baz throws right.
Onto the only batter who was missing from our cards, Vidal Brujan. A pretty exciting find because he is the rare OBR A, SP AA, meaning an incredible base stealer that is so rare in the modern game. While the projected  OPS 0.638 makes him a very light hitter.

One of the player cards not used because he was no longer on the Rays 40-man roster, and he was 2nd base and hit 3rd or 5th in the line-up, so with him gone we did insert Brujan's filled in card in the line-up but in the No. 9 spot.

With those updates, the two teams squared off to resume our season. 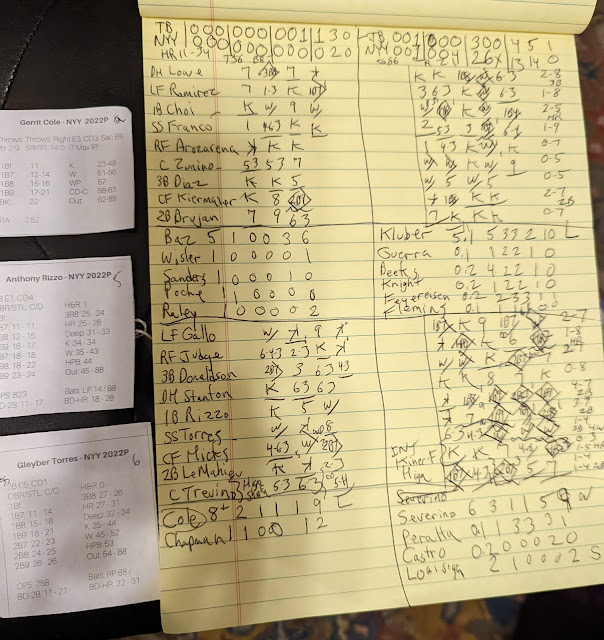 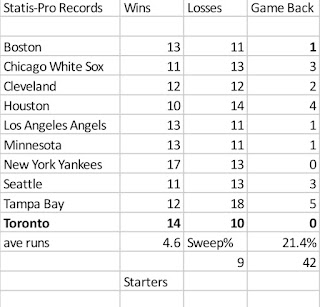 The Yankees rallied to win the series 4 games to 2 against the Rays after losing the biggest hard luck season of the year for Cole.

Cole went 8 innings allowing 2 baserunners (a bit and a walk) but stayed in for the 9th as a PB 2-7 and gave up a leadoff double that ended up being the only run in a 1-0 loss - which counts as losing a series 2 games to 1 in our league.

Torres had hits his last 3 trips to the plate and Rizzo his last 4 trips.

Posted by JohnPudner at 9:55 PM