The Houston Astros continued to be the biggest disappointment in the Statis-Pro baseball as George Springer took his former teammates deep three times in 2 games to improve to 23-13 in the game.

The reason for the Astros terrible season while the actual team is very good this year is quite simple, their pitching cards and in particular their relievers (outside of PB 2-9 Pressly at closer) are poor to mediocre. That was a recipe for disaster playing in homer friendly Toronto as the Blue Jays took credit for a three-game sweep with an 11-4 win in the opener, the stayed within 11-7 in the second game to avoid the sweep to count as a one-game-to-two lost in the second game.

The only solace the Astros could take is Pressly did induce a fly ball from Springer to preserve the second game, but Springer finished 5 of 8 with 3 homers.

The Astros drop to 15-21 - and while the records are overall lower in our league because teams to not get to play the bottom 5 in the league for easy wins, that still leaves the Astros a distant 8th place of ten teams.

All 2022 Projected Batters (49 pages, 9 cards to a page) and All 2022 Projected Pitchers (62 pages, 9 cards to a page) are needed to play the Statis-Pro baseball Game. If you printed the pitcher cards before July 22, 2022, we did catch one adjustment to the PB rating of pitchers based on the team on which they played. You can either use this link which has the correct numbers for all the pitcher cards or print out the cards from the link above and then adjust all the pitchers on certain teams by referencing this blog. 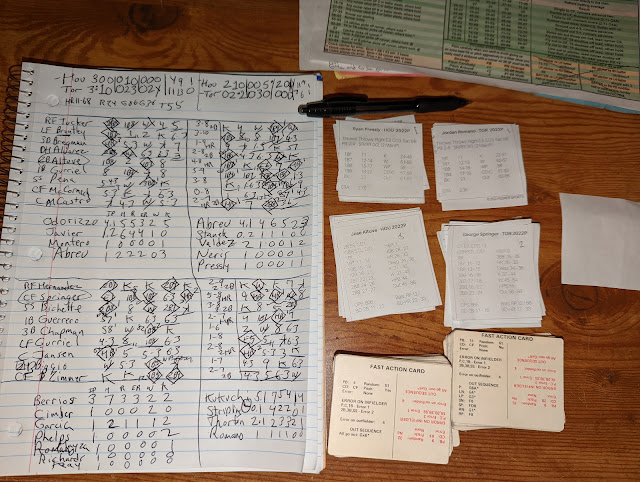 Posted by JohnPudner at 9:23 PM