Setting up for the Astros and Red Sox Statis-Pro series, we compared the Statis-Pro cards in our stacks for each team to the 40-day rosters, and both teams lost and added just a few players based on the blog. With Tampa Bay in the previous blog we had to add a few pitchers, but for this series we only needed to add three batters, which we found on this all batters sheet.

The all batters sheet does not usually have positions or whether they bat (or pitchers throw) left or right - so I added those items from the 40-man roster. Also note these three players were on the sheet, but if you ever need to add a player you don't see on the list you can make a quick card based on an estimated OPS he will have as indicated by those columns below.

Once I have that, I just free hand cards for the players I'm adding, so the photo below matches the top three lines above.

I actually did decided to add both centerfielders - Jarren Duran for the Red Sox adn Jake Meyers for the Astros, to the line-up against left-handed pitchers only. Both will hit in the No. 8 spot in the line-up for me in those games. 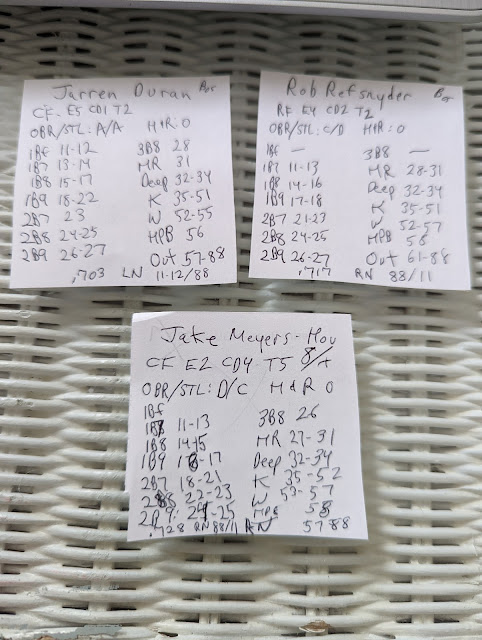 The Red Sox salvaged a split when Bogaerts hit a 3-run homer off Astros closer Pressly for an 8-6 win. The Astros won the first game 5-1 behind Verlander allowing only three baserunners in 7 innings.

Brantley went an incredible 8 of 10 in the series with a double and homer, and Alvarez reached all 5 times in the second game. 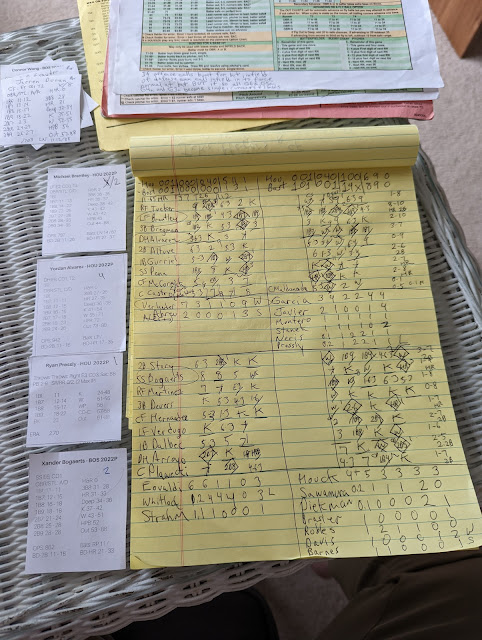