Shane Bieber is still the Cy Young favorite, but the Houston Astros finally erupted after a disappointing Statis-Pro starts with 3 successful hit and run plays in the first inning to score 3 runs on Bieber.

Tucker singled to start the game, then the Astros took advantage of being the team that strikes out the least and thus his several HR (hit and run) 1s and 2s while almost all players are 0s in the modern game. Brantley and Bregman followed with hit and run singles, then Gurriel had a hit and run rbi ground out all in the first inning.

In between Austin Hedges, with the best CD of 5 and catcher drew a 65, one of only 2 numbers on which he cannot get to a ball quickly to allow a single. The Astros won 7-0 for a sweep, and then in the second game Alvarez 2-run homer in the 8th gave them a 4-3 win and credit for a 5 games to 1 series win.

Verlander pitched the best game of any pitcher in this Statis-Pro seasons with 15 strikeouts and one walk in 7.2 scoreless innings before Neris came in to finish. Overall the Indians managed no extra base hits in 2 games, striking out 31 times as Javier won the second game in relief with 4 shut out innings behind 7 strikeouts and 0 walks. 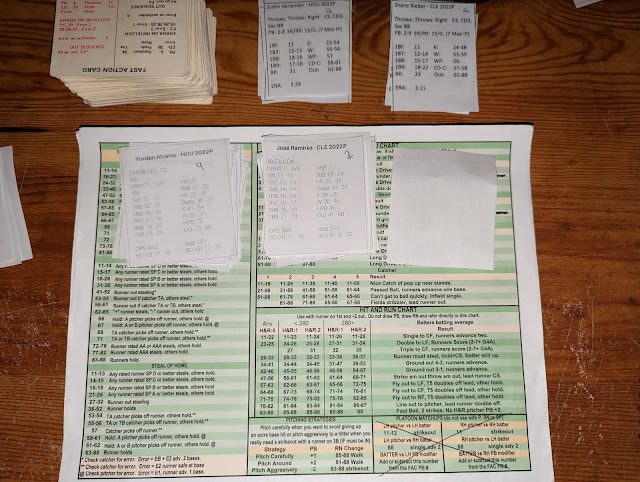 Posted by JohnPudner at 9:47 PM