This blog gives an easy step-by-step to look at a new team for the first time and pick the starting rotation, bullpen order and batting order.

Because we were not that familiar with the personnel for the young Seattle Mariners, we use them as an example below, and once showing you how we picked our line-ups and rotation, culminate by showing you the very exciting game they played at Tampa to wrap up our 2nd round of AL play. Through those games, teams are average 4.4 runs per game, and yet the finale included both teams getting 4 runs on one play with Grand Slam homers.

Step 1 - Choosing the Starter at all 8 positions and DH

Once we print and cut out the team's Statis-Pro player cards we take the batters and lay them out by position to first pick who will start at each position. We mainly use the OPS near the bottom of the card to choose the better player, but then do look at speed, defense and the rest of the card when players at the same position are close.

In this case, we had no DH or 1st baseman, but we had three 3rd basemen who all had OPS high enough to start (so we wrote in "DH" and "1B" on one of their cards to note that is where we were playing). There was only one shortstop, so that was easy, two 2nd baseman but one was clearly the better hitter against lefties and one against righties so we chose them as a platoon noting Moore would not play against righties with a " /X" and Frazier would not hit against lefties with a "X/ "

We had a clear centerfielder in Rodriguez (who also had the highest defensive rating at E1, CD5, T5) but the other centerfielder seemed to be the best DH option against righties and 3rd baseman Suarez against lefties. the two right fielders Winkler and Haniger both hit will enough to start so we moved Haniger to left field. The best catcher was also obvious, so at this point we knew the 9 batters we wanted in the line-up. 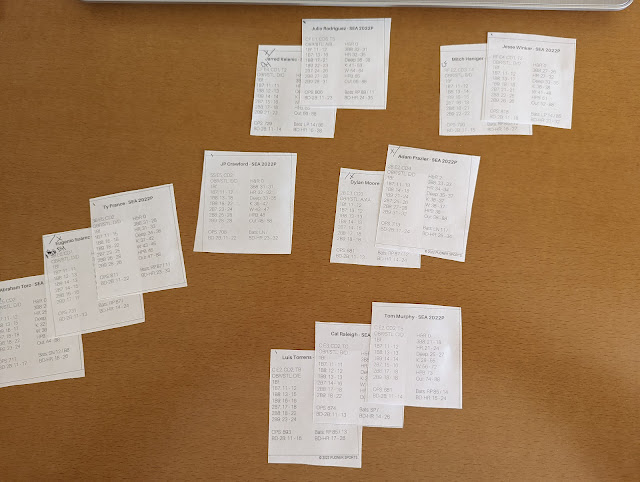 Next we organize them in levels with the best OPS in a top row, then the worst in the bottom row. Seattle had four starters with fairly comparable OPS higher than .800, so we put them in the top row, and then seeing that Rodriguez also had great speed (A/B) put him in the lead off post and ordered the next 3 behind him.

The middle OPS players were both very good against either left-handed pitchers or right-handed pitchers based on the Bats:  / numbers, so the the team actually ends up with a pretty strong top 6 hitters with Suarez and Moore against lefties and Kelevic and Frazier against righties.

The bottom 3 hitters are weaker and we flip them a bit based on if the opposing pitcher is lefty or righty. 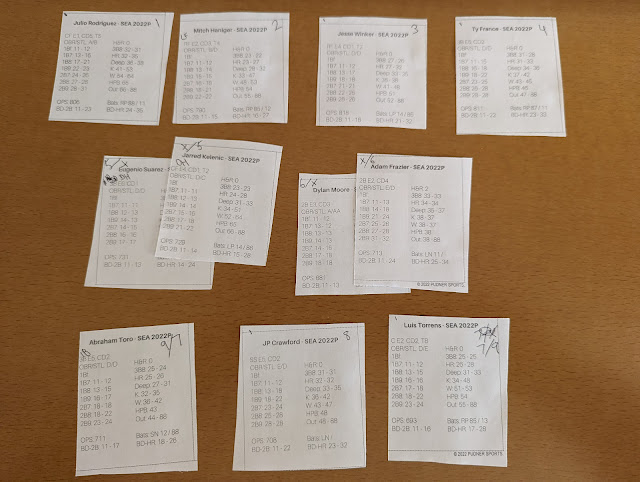 We then turn to the pitchers. If their (Max IP) is 5 or higher they are a potential starter and we put them on the top row, and if not we put them on the bottom row. We then go left to right in order of their PB ratings, with any PB2-9 and then PB2-8 to the far left (Seattle has none of these truly elite pitchers), then 2-7, 4-7, 2-6, 2-5 and finally weaker 2-4. We only use the top 4 starting pitchers as starter and write on their card a, b, c and d, meaning in this case we dropped two Seattle starters down a little to reliever. Then we number the relievers from best down starting with 1 for the closer we choose. 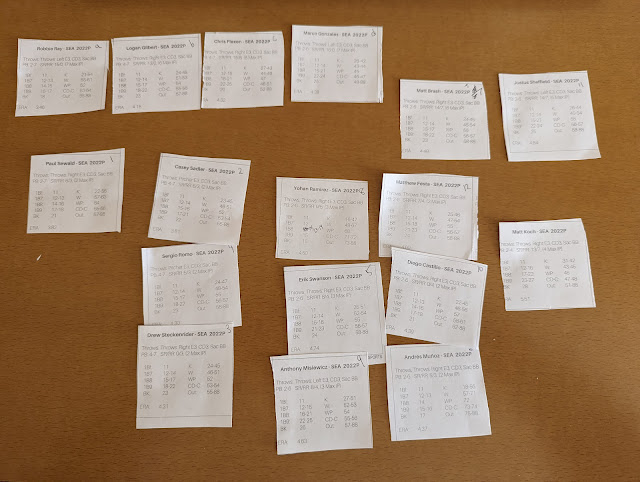 At this point, we line-up both next to their opponent and write in both teams. We also add the HR Range on deep drives for the ballpark, in this case the ball only goes out of the park on 11-17 on a deep drive, while 18-88 is caught for a SacFly. This actually cost Tampa 4 homers in the two games. 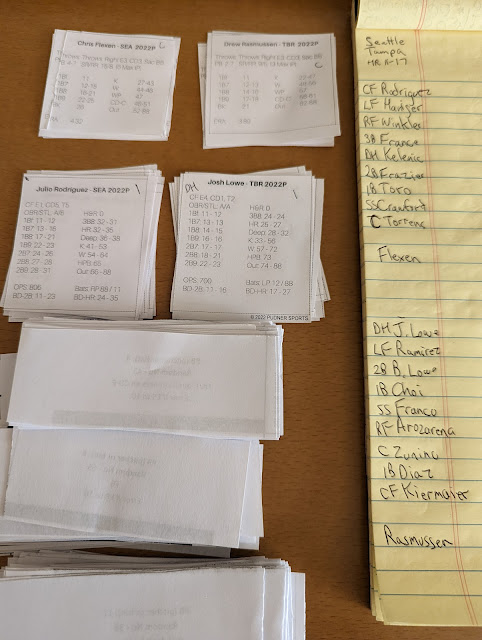 And finally we play the two games. The first game took 34 minutes in a 3-0 Seattle win in a pitchers duel, while the second one took a little longer with the team's trading grand slams and going 11 innings before the Rays much deeper bull pen finally won out 6-5. 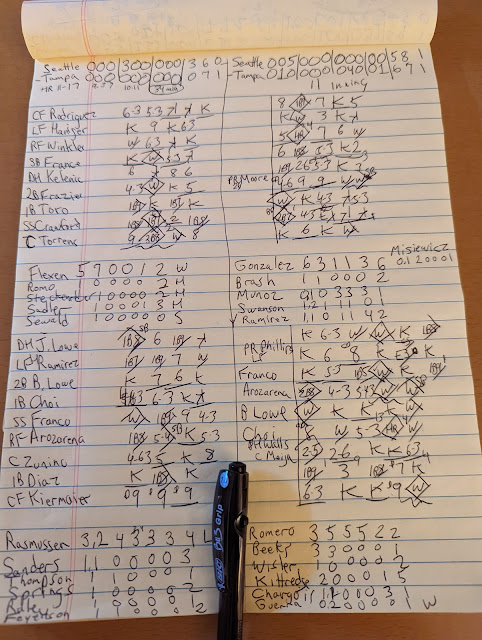 And finally, here are the results and standing after two rounds. All 10 teams are between 8-4 and 4-8, and these results are updated on this google sheet. 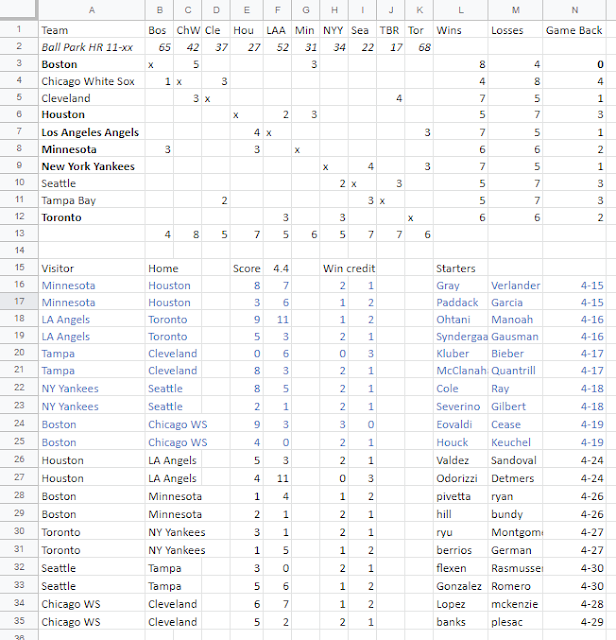 Posted by JohnPudner at 6:23 PM