A few days after Clayton Kershaw was pulled just 6 outs from a perfect game, Shane Bieber was almost as good in the first illustration of how our new Statis-Pro handles he current debate regarding if starters should be pulled in situations like Kershaw's.

In our game, Bieber finished the 7th inning with a 6-0 lead against the Rays. The traditional endurance factor in Statis-Pro uses Bieber's SR of 15, which was reduced by one for each of the 7 innings completed, one more for his only hit allowed, and twice for issuing walks to leave him with 5 left on his SR. 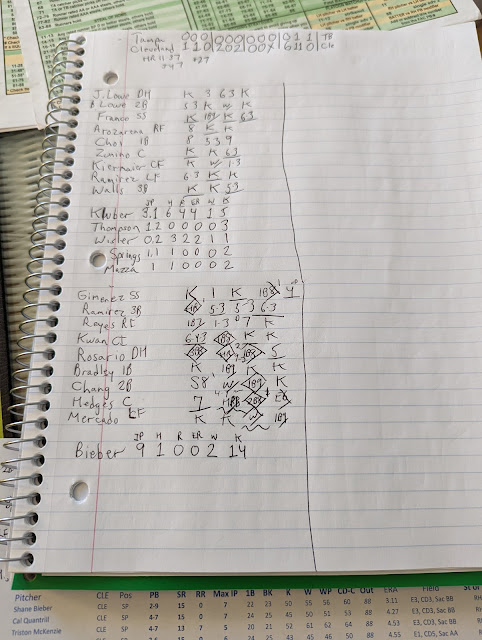 However our new factor in the 2022 cards is the "Max IP" which is 7 for Bieber. This does not mean he had to leave after this 7th inning pitched, but rather when a pitcher hits his max his SR (or RR for relievers) is reduce to 0 at that point, meaning Bieber came back out for the 8th but pitching as a PB 2-8 instead of PB 2-9 like the first 7 innings.

Once a pitchers SR is reduced to 0, not only does his PB drop one, but it will continue to drop another one spot for any other baserunner allowed, run scored, or inning that ends - so unlike Kershaw he stayed it but it would have taken very little to knock him out.

The Rays look like a contender, and Cleveland's second best Cal Quantrill is only an average pb 3-7 for the second game. Here is our setup.to.llay, with the Brewers game in TV and actually occuring a few miles away. 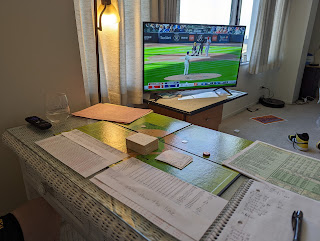 Here is the complete score sheet for both games, after the Rays offense rallied late to win 8-3 in the nightcap. 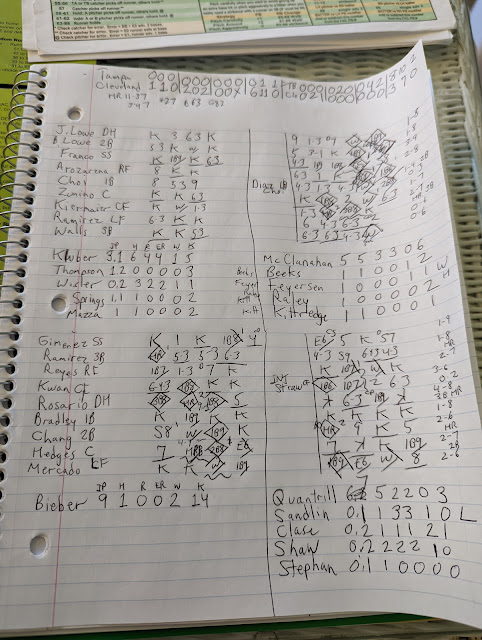 Posted by JohnPudner at 2:41 PM